They may be older and wiser, but that doesn’t make them more mature. Cameron Diaz and Leslie Mann play a prank on Kate Upton. 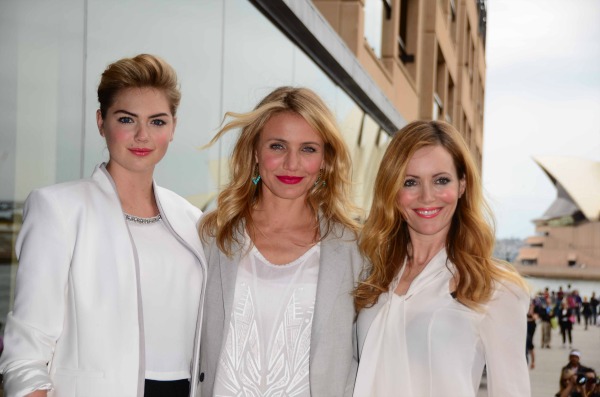 Cameron Diaz and Leslie Mann might be a bit older than Kate Upton, but that certainly didn’t stop them from performing a few sophomoric hijinks on the 21-year-old model. On Thursday, the two actresses explained to Late Night host Seth Meyers what they did to an unsuspecting Upton.

Meyers inquired, “It seems like you guys had fun working together, and you had a little bit of fun together on a flight.”

That’s when the talk-show host produced a photo of a sleeping Upton with a mask on her face, surrounded by Diaz and Mann who had drawn a mustache on her as well as themselves.

Mann said, “She was fast asleep, like right away, which makes me so mad because I can never sleep on flights. So Cameron and I were up and we’re like, ‘Yeah, what can we do?’ She’s like passed out and we decided to draw [a mustache].

Model Kate Upton admits that she’s been cheated on before >>

“Whereas you are adult women who draw on people’s faces,” retorted Meyers.

The ladies admitted to getting a case of the guilts, so that’s when they added their own mustaches. Eventually, Diaz wiped the evidence off of Upton’s face before she even woke up. However, Mann was a little more mischievous.

She said, “I’m like, ‘No, just leave it on. It would be so awesome in the morning when she wakes up.’ And she wiped it off.”