With 44 television cameos under her first lady belt, Michelle Obama has made more television appearances than Laura Bush and Hillary Clinton in the first four years of a president’s term. So how and why does she do it? Let’s review. 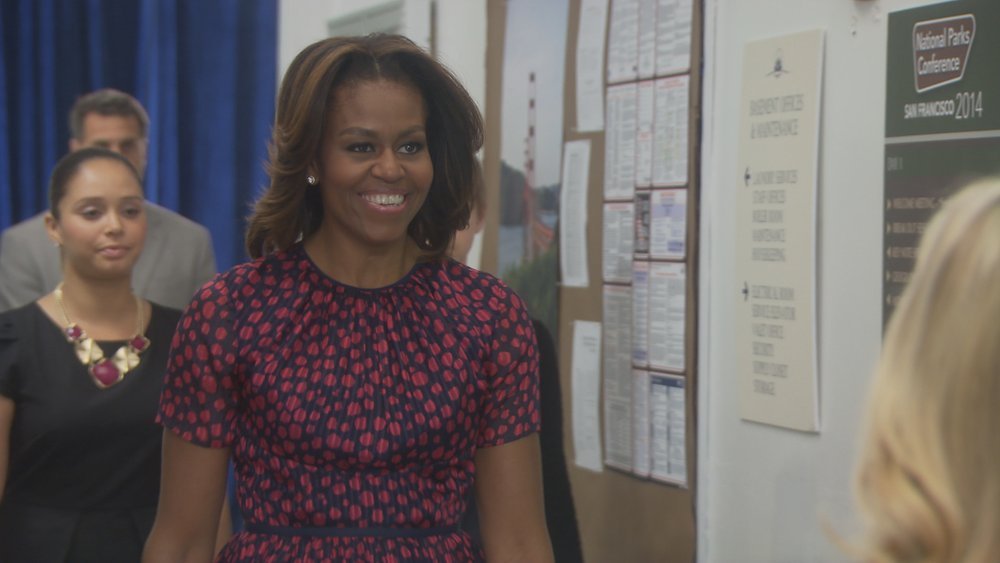 President Obama’s biggest asset, Michelle Obama, has created a lot of buzz for stopping by the set of the Season 6 finale of Parks and Recreation. In the episode, the first lady of the U.S. bumps into Leslie Knope at the National Parks conference in San Francisco. We all know how Amy Poehler’s character, Knope, reacts when she rubs elbows with anyone of any political significance, so her reaction to bumping into the FLOTUS was priceless. Mrs. Obama encourages Knope to take the position in Chicago. Poehler’s character responds with, “I agree with you on all things throughout history and till the end of time, forever.”

Hail to the chief’s wife: Michelle Obama on Parks and Rec >>

The first lady has been warming up for her Parks and Rec debut with oodles of television appearances, two of her most memorable are thanks to Jimmy Fallon. Fallon and Will Ferrell host the show Ew and the first lady makes an appearance to advocate for (say it with us, folks) fitness. She assures the two that exercise is not “ew!” and then proceeds to dance with the duo. She also tells her two hosts that kale chips are not “gross!”

Our favorite appearance with Fallon is the skit “Evolution of Mom Dancing.” Behold, the “Happy Snapper” and the “Out Of Sync Electric Slide.” The first lady knows her way around a dance floor.

As to the “why” of the first lady’s love of television cameos — the people love her. She’s smart, funny, self-deprecating at times, and most noticeably, she steers clear of heavy-hitting politics. Her appearances are political in nature, of course, in as much as the administration is smart enough to cleverly place its biggest asset, but Mrs. Obama typically steers clear of big issues. She never comes across as having a personal political agenda. She just wants fat kids to get off the couch and do a few push-ups as demonstrated here with our first lady of afternoon talk shows Ellen DeGeneres.

Push-ups aren’t the only thing Ellen and Michelle Obama have in common — they have both made memorable appearances on Oscar night. When the first lady presented the Oscar for best picture in 2013, she was everything we’d expect her to be — elegantly dressed, perfectly coiffed and poised. Though the first lady represented the White House flawlessly, many media groups and politicians questioned the increasingly thin line between politicians and entertainers, and specifically the deep pockets and large political donations that come from this alliance.

We would not be the least bit surprised if the future host of the Late Show, Stephen Colbert, invites the first lady to the show when he assumes hosting duties from David Letterman. After all, the two already have a rapport from when Mrs. Obama appeared on The Colbert Report and made a crack about Colbert’s thinning hair.

For all her television success, has the first lady truly arrived in Hollywood until she’s done Between Two Ferns with Zach Galifianakis like her significant other, President Barack Obama?