It’s all about Enzo, or, at least, he wants it to be all about him. It just doesn’t exactly go as planned, of course. Such is The Vampire Diaries. 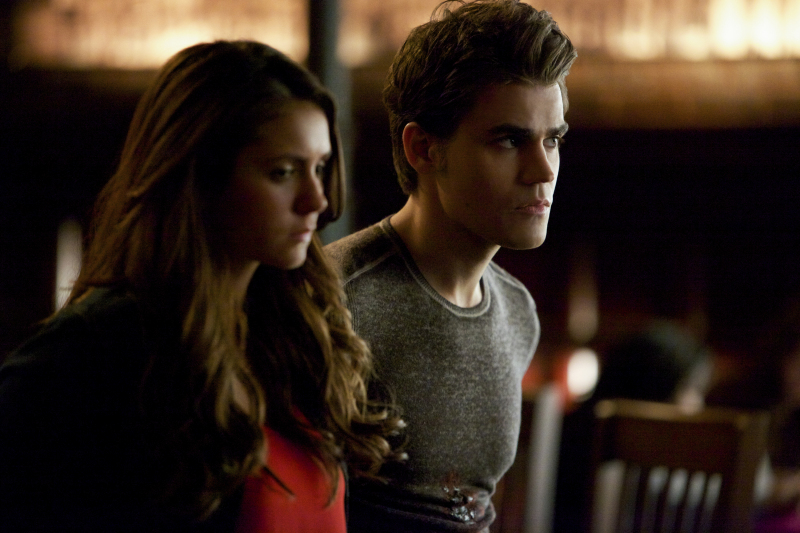 Oh, Enzo, we knew the bromance with Damon (Ian Somerhalder) couldn’t last. That didn’t stop us from hoping that your time on The Vampire Diaries wouldn’t be short-lived.

OK, so in case you couldn’t guess from the above, Enzo was killed in Thursday night’s episode. But that doesn’t mean he’s going to disappoint us. Why? Because it’s The Vampire Diaries, which means he’s dead, but not dead, dead. I guess since **spoiler alert** Stefan (Paul Wesley) ripped his heart out, but he came back from the other side as a ghost that would make him somewhere between undead and super dead. Mostly dead? (Cue the Billy Crystal voice here.)

We don’t really blame Enzo for falling off the wagon. We just blame him for falling as hard as he did. Anyone would lose it a bit if they found out their BFF killed the woman he’d been fantasizing about for 50-plus years. Enzo takes that short walk down the path of darkness. All the way to the land of no emotions.

Here’s where Enzo got things wrong, though: Damon was actually pretty justified in his actions. When he killed Maggie, he didn’t know she was Enzo’s Maggie. Plus, she was looking for Damon, knowing his emotions were turned off and with a desire to kill him while holding an Augustine needle.

Even knowing these truths, Enzo still wanted vengeance and makes the one move that will end anyone’s life in the blink of an eye on this show: He threatens Elena (Nina Dobrev). And there goes his heart, courtesy of Stefan. Though, Enzo did relish the idea that his death could cause a rift between the brothers. He even helps Stefan do the deed.

The other pending disaster in Thursday night’s episode was Bonnie’s demise. Again. The other side is crumbling, and without the supernatural limbo, there is no Bonnie. We’d really like to see her stick around this time because we’ve grown just a little bit fond of her over the past five seasons.

The Travelers, on the other hand, don’t seem to have a problem with staying alive. They’re hell-bent on breaking the witches’ curse, and Markos has a plan to do it with Sloan as the guinea pig. It’s all kind of confusing, but the long of the short of it is there’s some chanting, bloodsucking, throat-slitting, and Sloan comes back from the dead no longer a vampire. Uh, is anyone else thinking this may be Elena’s chance to become human again? The whole thing was hard to follow, like I said, and, correct me if I’m wrong, but that was my takeaway.

This episode really just focused on building that drama as we inch closer to the season finale. With ghost Enzo now on the loose, and The Travelers bringing people back from the undead, who knows where we’re going to end up this season.

“Five words that make me want to vamp-toss my keys into your chest cavity. Little Gilbert, help me in the fight against my dark side and elaborate, please,” Damon said to Jeremy when he finds out The Travelers’ knife is missing.

“I’ve got two brain-dead teenagers who didn’t realize two plus two equals one hijacked hybrid,” said Damon, who’s had some great lines when referring to Matt, Jeremy and Tyler these past few episodes.

“Whoa, whoa, whoa, Enzo, you have your murder voice on,” said Damon, again at your service with the perfect one-liners.

“That’s the problem, Damon. I don’t want to hate you because if I hate you, then I have nothing left,” Enzo said before turning his emotions off.