Ari Graynor opens up about her new CBS series Bad Teacher, including why the series is outrageous but not dirty and how the show differs from the 2011 film of the same name. 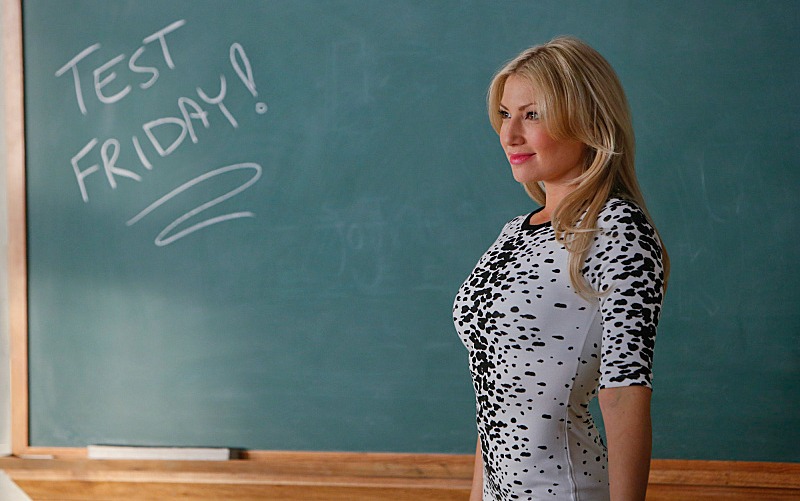 CBS premieres its new comedy Bad Teacher on Thursday, April 24. SheKnows spoke exclusively with star Ari Graynor about the differences between the series and the film, what might surprise some fans about the show, her reasons for taking on the role and much more.

Not sure what Bad Teacher is about? Graynor summed it up nicely.

“It’s a show about a woman who has no intention of being a teacher, but has been cheated on and dumped by her husband and left with nothing and has to figure out how to survive and is completely out of place in this new world, but ends up taking to her environment in a multitude of surprising ways.”

Graynor plays Meredith, the woman who becomes a teacher after her life falls apart. It was a role that appealed to Graynor for a number of reasons.

“She, first and foremost, is unbelievably confident, completely unapologetic, unaware of what people think her,” Graynor said. “She is moving forward, and she is going after what she wants, but she also acknowledges, probably more than she thinks she is, how painful [her breakup] was and how much that changed her perception of who she is and of her life.”

“When I read the script it was just really funny and really smart,” Graynor continued. “The thing that’s most exciting to me about comedy is when it comes from a place of character, and it comes from dynamics between people rather than just a well-written joke. There are plenty of well-written jokes in this show, [but] they are secondary to this really fun world with surprising, rich characters. Also, as a woman, there are very limited roles for women out there, especially meaty ones that are fun and creative and unique and allow you the space to have a hand in creating a whole persona and a whole world.”

Anna Faris and Ari Graynor at What’s Your Number? screening >>

Though Meredith is ultimately trying to make her own life better, at least in the beginning, she’s also very willing to help others.

“I also think that, even though she has this sort of sparkly outside, she’s actually a real underdog herself. She’s just had her life turned upside down and has to figure out to survive. But I think [because of] her own struggles she really has her eye out for people who are having a rough time.”

Though the main story will follow Meredith’s attempts to get her life back while taking on a teaching job, ultimately the show is about the people who surround her.

“I think one of the things that’s really special and fun about this show is the wide range of all of the characters,” Graynor revealed. “Every character on this show is really unique and fun and surprising in their own way.”

Part of Meredith’s journey will be her adventures as a teacher, though she gives the sort of lessons that aren’t always taught in a classroom.

“She might not be the best teacher of facts, but she is the best teacher of life lessons,” Graynor said. “I think that’s another piece of the show that goes on a little bit of a journey. I think there’s a considerable amount of time where she’s not overly invested in being a good teacher in the traditional sense. I think she always really prides herself on her relationship with kids and how she relates to them. But I think over the course of this season there [are] definitely episodes that come up where she takes a great pride in that.”

One thing that might surprise viewers is the fact that the TV show isn’t based directly on the movie of the same name.

Something else that may surprise viewers is the wholesome quality of the comedy in the show. It’s not as dirty as you might think.

“The most exciting surprising thing to me is that it’s not dirty,” Graynor revealed. “It’s not dirty or raunchy. It’s outrageous, but there’s a certain kind of sweetness to it that I think a lot of the comedies that were on a long time ago in the ’80s or ’90s had. I just think the quality is different, or they’re more for specific audiences. I think what’s exciting about this is that there’s such wide-ranging type of humor and stories that it’s the kind of show that parents could watch with their 13-year-old and not be embarrassed on either side.”

Do you plan to watch Bad Teacher when it premieres on CBS?