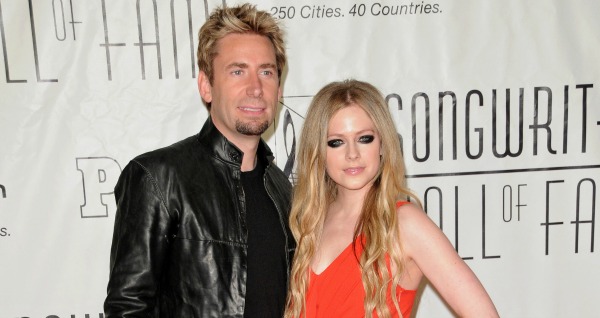 Let me out myself before I launch into my argument on suckiness. I love Nickelback. There, I said it. I downloaded 15 of their songs on my iPhone — recently. I also heart Chad Kroeger. I think he’s a bit of a hottie. And I was more than a little pissed when Avril Lavigne married him because now I can’t pretend to be his girlfriend anymore. You don’t agree? Watch this.

Kind of hot, right? So, to answer the question “Is Kroeger’s suckiness rubbing off on Lavigne?”, I had to first get to the bottom of why everyone be hatin’ on Nickelback and if Lavigne’s new “Hello Kitty” fit the criteria.

After spending a solid eight minutes on the internet researching why people hate Nickelback so much, I learned several things. One of them is that lots of people secretly love Nickelback. Phew! At least I’m not alone. (Nickelback revival, anyone?) Also, people theorized that Nickelback hate is rooted in weak lyrics.

Um, OK. Firstly, if weak lyrics are the standard by which we decide music is sucky or not, then 90 percent of the music we listen to is in the suck meter’s red zone. Secondly, I think most of Nickelback’s lyrics tell a story, as in “Someday,” which you just watched. Sure, the lyrics to “Photograph” are a little cheesy — I’ll grant you that. But by and large, Nickelback’s lyrics are one of the reasons I love them, and I’m comfortable with being labeled officially “uncool” because of it.

So does “Hello Kitty” have weak lyrics? Describing the lyrics in “Hello Kitty” as weak would be generous. These lyrics sound like they were written for preschoolers, but we’re pretty sure if you showed the video to a group of preschoolers more than once, they’d get up and walk out of the room. See for yourself.

Why yes, someone does need to remind Avril Lavigne that she is almost 30, not a sophomore in high school.

Former Nickelbackeons agree that people love to hate Nickelback because they are mediocre but ridiculously popular. Well, now we have a problem because if mediocre-but-popular is the standard by which we define suckiness, then all of our pop icons suck. In fact, it would be amazing to get back to the days of mediocre. Most of what we see today (“Hello Kitty”) doesn’t even hit the so-so mark. If real talent is how we define who sucks and who doesn’t, then the music industry has a monumental problem on its hands.

Hate for the sake of hating

The internet also informed me that it’s cool to hate certain things in pop culture for no real reason, but then it confused me when the “Justin Bieber syndrome” was cited as an example. It was suggested it is popular to hate Justin Bieber but that the hate was unwarranted. I’d argue that people are over Justin Bieber because he acts like a self-indulgent, entitled brat who thinks consequences are for people who aren’t named Justin Bieber.

Chad Kroeger and the boys didn’t make headlines for unruly or divalike behavior. They didn’t make overly sexualized videos or objectify women in their videos for attention. They behave like ordinary dudes, which is one of many reasons secret Nickelback fans like me exist today.

So will it become cool to hate Avril Lavigne? Probably not — unless she keeps cranking out crap like “Hello Kitty,” and then the public will be hatin’ on her for different reasons.