Prince William and Kate Middleton have been enjoying their trip to New Zealand and Australia, but it looks like the trip has given Middleton an opportunity to honor her mother-in-law. 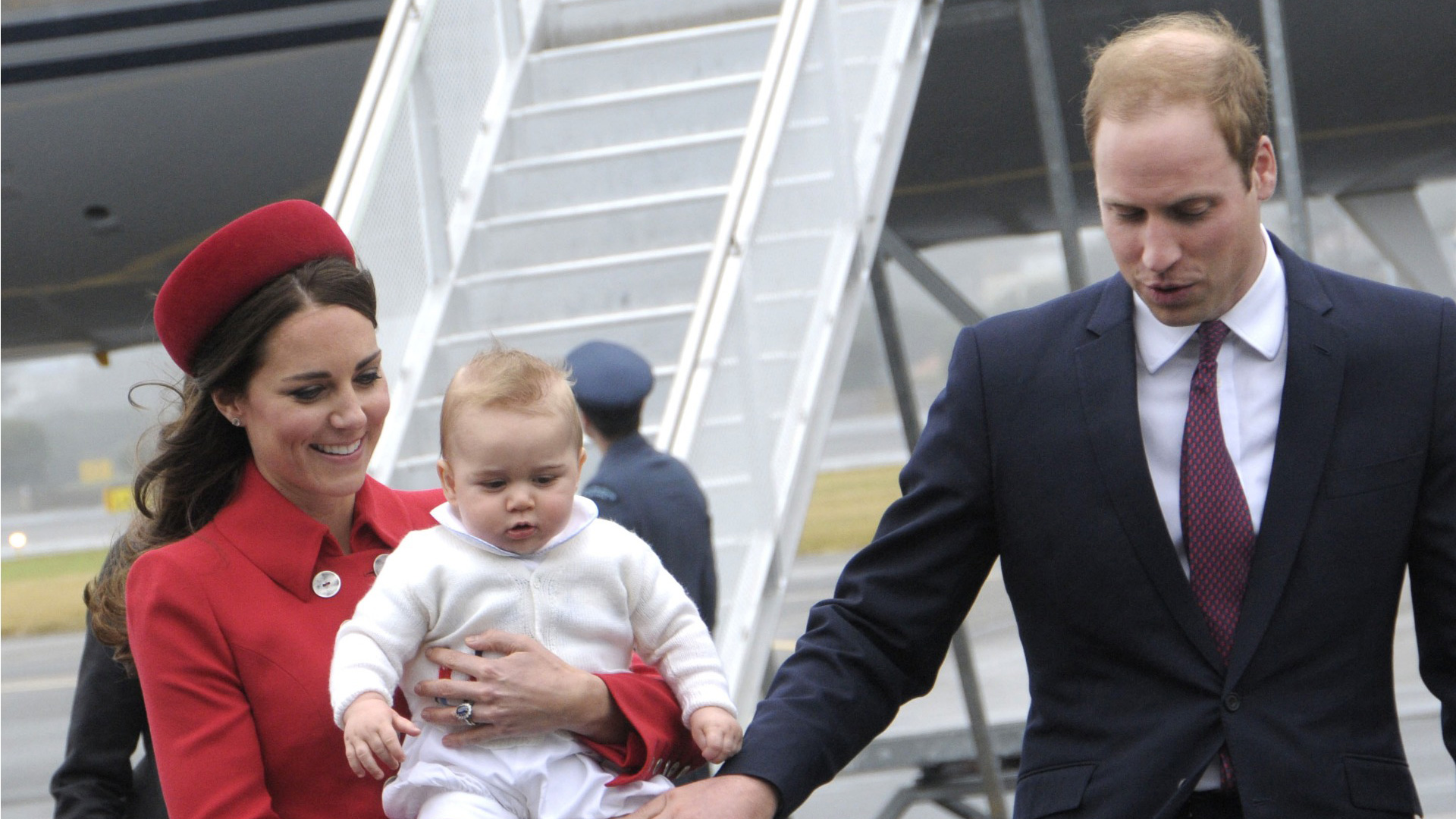 Kate Middleton never met her mother-in-law, but it looks like the duchess is doing what she can to honor Princess Diana during her and husband Prince William‘s trip down under. Although styles have changed since Princess Diana first visited Australia and New Zealand, Duchess Catherine may be honoring William’s mother through the styles she is wearing on her visit.

On their 1983 trip, Princess Diana and Prince Charles posed in front of Ayers Rock in Australia. Duchess Catherine and Prince William took a similar photo on April 22, 2014, in Uluru, and seemed to be intentionally channeling William’s parents. 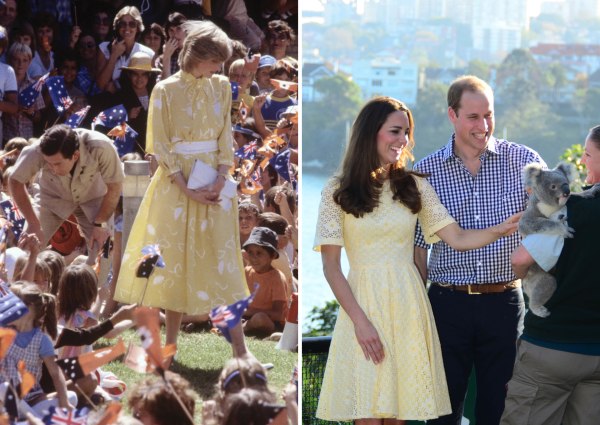 On her March 1983 trip, less than a year after giving birth to William, Princess Diana wears a light, yellow dress. Although Kate has worn multiple yellow dresses on her Australian tour, the dress Middleton wore while visiting the Taronga Zoo in Sydney was an eyelet ivory and yellow dress similar to Diana’s, all the way down to the flowers. 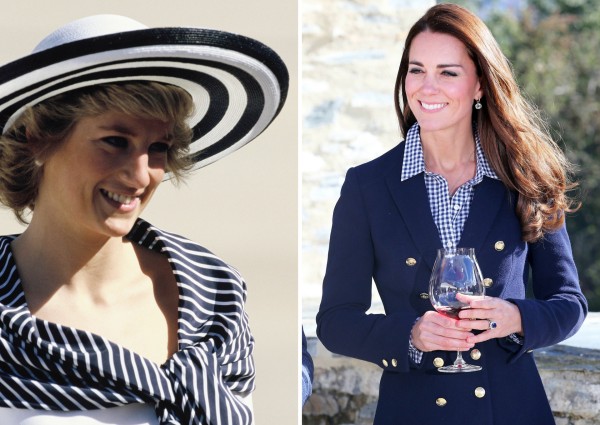 Kate Middleton channeled Princess Diana’s sailing look with her navy jacket and pants. Diana wore the look, while on one of her many Sydney trips, with a sweater over her shoulder and a navy and white hat. 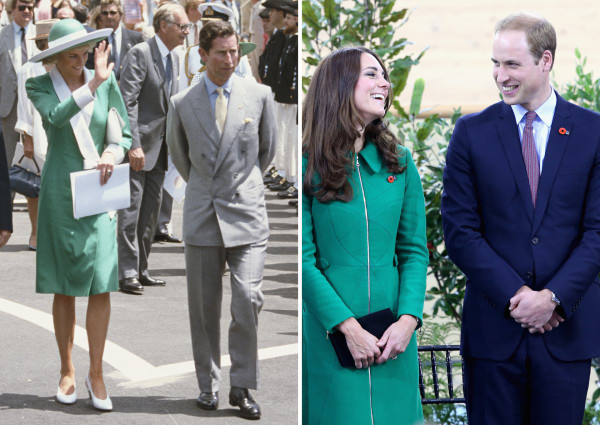 During her 1988 trip down under, Princess Diana wore a green suit dress on her tour around Sydney. Middleton wore her green Erdem coat (that Prince William reportedly called “a bit bright”) while visiting the Avanti Drome in Hamilton, New Zealand. While there, Middleton and Prince William were presented with an Avanti mini bike and cycling jersey for Prince George. 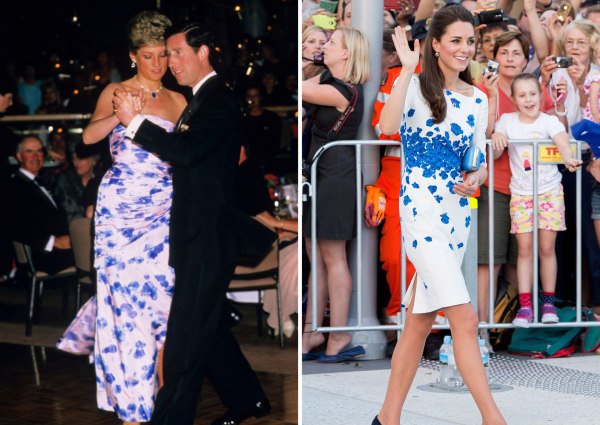 On their 1988 trip for the Australian bicentennial, Princess Diana wore a silk taffeta strapless evening gown designed by Catherine Walker. Middleton seems to again be honoring the princess by wearing a blue and white L.K. Bennett flowered dress to greet fans while out on a walk in Brisbane on April 19, 2014. 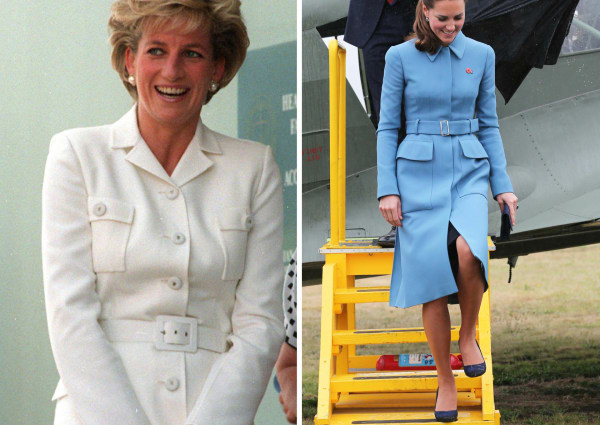 Princess Diana posed outside the Sacred Heart Hospice during a visit to Sydney. Middleton wore an Alexander McQueen blue suit, updating Diana’s white look, while checking out a vintage airplane at the Omaka Aviation Heritage Centre in Blenheim, New Zealand. 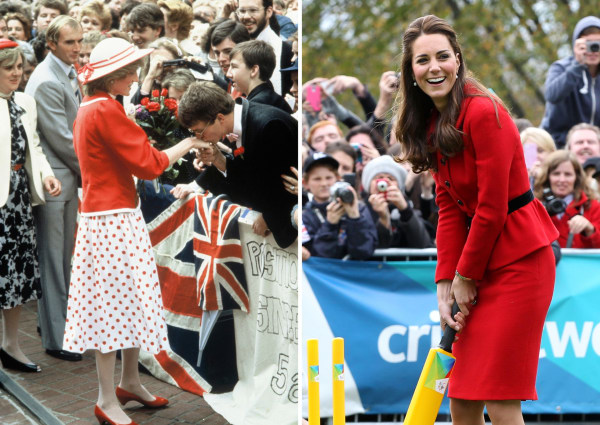 During her 1983 trip, Princess Diana wears a red jacket while getting a kiss from an admirer while she meets with the public in Melbourne. Kate Middleton tries her hand at cricket wearing a similar red suit, by Luisa Spagnoli, while she and Prince William were attending a 2015 Cricket World Cup event in Christchurch.