Mert Alas, one half of the fashion duo Mert + Marcus, took to Instagram on April 21 and posted a photo of Madonna with a caption that alluded her new album was finished. 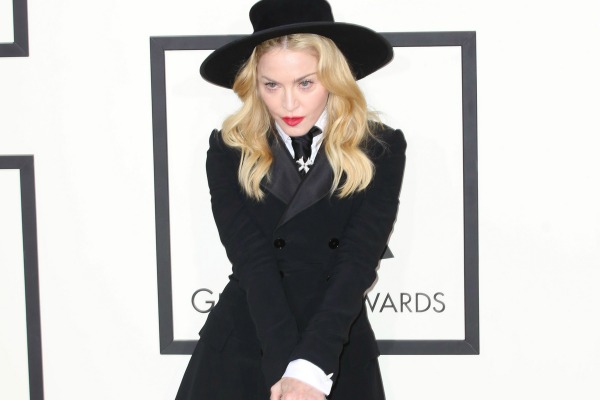 It’s only been a few months since she stepped back in the recording booth, but word on the street is that Madonna has completed her brand-new album. On Monday, April 21, the blogosphere lit up when Mert Alas, one half of the headline-making fashion moguls, Mert + Marcus, who have collaborated with the queen of pop on several occasions, posted a rather interesting photo on Instagram.

Wearing a mythological-esque headband and holding oversized leaves, Madonna looks as vibrant as ever, offering viewers an open-mouthed facial expression. It wasn’t exactly the photo that caused fans to go into a frenzy, though, but instead the caption, where Alas stated that he was listening to the new project from his room. At the time of press, more than 5,740 users had liked the photo.

Back in February, the pop titan told the Globe and Mail that she was in the early stages of the album’s creation, chatting with various writers and producers on what direction she’d like to go. Avicii, Natalia Kills and Toby Gad are just a few of the collaborators the singer has worked with in recent months.

No word from Madonna’s camp on the buzzing rumor, but that kind of silence might be exactly what she and her team are striving for. After the monumental splash Beyoncé created with her surprise self-titled album, it is reported that iTunes is set for another surprise album drop that will follow in similar footsteps. There are not many clues as to which mystery act is behind the iTunes exclusive, but Digital Music News reports that the artist holds a significant amount of star power.

Madonna’s last studio album, MDNA, was released in 2012 and was met with mixed reviews.