Last week’s happy dance is getting the quick axe on Game of Thrones, paving the way for some serious undertones in tonight’s episode. 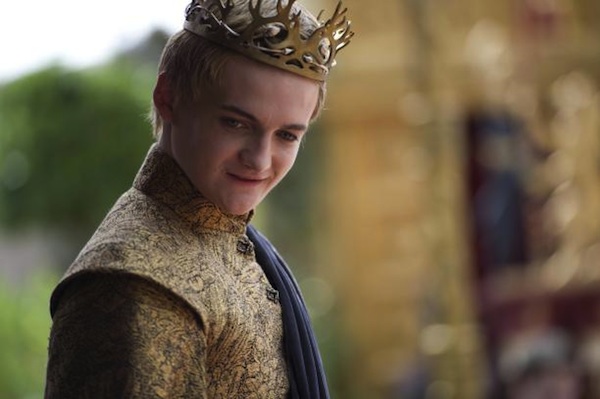 We know many of you are still dancing with joy over the events in last week’s Purple Wedding, but it’s time to sit down because tonight’s episode of Game of Thrones is getting serious. We’re paying for all that glee from the last episode. It’s a heavy price. Ultimately, the moral is that justice and human decency are far from restored to Westeros despite Joffrey’s demise. Buckle up, folks. There are still a lot of bumps in the road to come.

Tonight’s theme seems to be crushing relationships. Sam says goodbye to Gilly. Sansa leaves King’s Landing and bids farewell to Sir Dontos. Arya learns she and The Hound are far from friendly. Tyrion (Peter Dinklage) orders Podrick to leave King’s Landing to save his life. Jon and Ygritte still try to say goodbye to each other.

WTF are we talking about? Only this week’s shockingly perfect episode >>

Of all the characters’ rough story lines tonight post-Joffrey, Jaime’s hit us the hardest. This season so far we’ve seen him redemption bound and on his way to becoming a new and improved version of the swordsman he once was. He’s the character we are all surprised we’re now rooting for. Tonight, we question that sudden trust we have in his chivalry as he forces himself on Cersei (Lena Headey) in a moment of rage. Right next to Joffrey’s barely cold body. It was hard to watch, no doubt.

Now, we don’t condone his behavior. In fact, we’re appalled by it despite the fact that next to Joffrey, Cersei is the most fun character to hate on. But there shouldn’t be any Cersei bashing from tonight’s episode. We feel bad for her. Because her actions in the show aren’t driven by evil; they’re driven by her need to survive. All along in the series, she’s been fighting against her glass ceiling position. She’s tried at every turn to fight her father and societal standards for her right to make her own decisions in the world. And just when she’s at her lowest, having just watched her son poisoned, Jaime, of all people, is the one to debase her even further.

Jaime isn’t without his demons, let’s be clear on that. Cersei did nothing but dismiss him as incomplete now that his hand is gone. It’s almost like she wanted him to snap, though she never could have anticipated he would snap in the way he did. It’s hard to believe these are the two close allies we saw at the start of the series. They’ve both been destroyed by the battle for Westeros, and it’s heart wrenching.

The only good news of the night came from the Dani camp. Chick is so bad a$$ we consistently feel inadequate after watching her free thousands of slaves. We need to at least up our ante on the charity work or something. No dragons in sight tonight. Instead, we got catapults, filled with barrels of collars and chains so the slaves of her newest city takeover can return their master’s kindly treatment.

Need more Joffrey moments? How about some fake ones from these spoofs? >>

“We’re all liars here,” Sansa says when Peter asks her to remember what he told her at the castle.

“The world is overflowing with horrible things, but they’re all a tray of cakes next to death,” Lady Olena tells Margaery after Joffrey’s death.

“Pod, there has never lived a more loyal squire,” Tyrion says by way of farewell to Podrick. *Tear*