Susan Mallery gives us the scoop on her just-released new romance When We Met, which is heating up the summer a little early with a scorching love story. 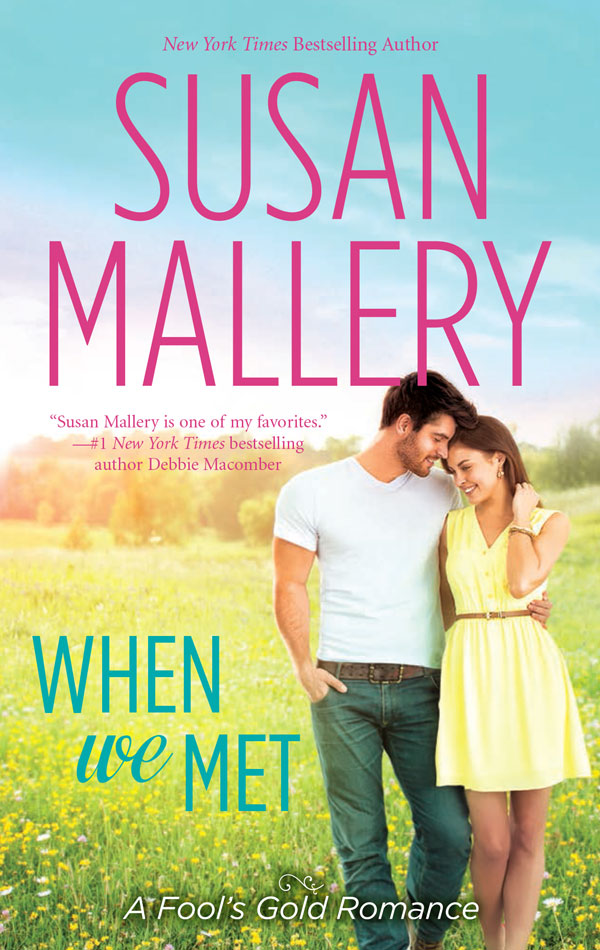 Get ready for some summer lovin’. Susan Mallery is bringing her Fool’s Gold series back with the addition When We Met, which hits stores today.

Jane Green talks Another Piece of My Heart >>

“For those who haven’t yet visited Fool’s Gold, let me assure you, you can jump in at any time without feeling you need to go back to the beginning,” Mallery told us during her interview with SheKnows.

She advises readers, “Each book is written as a stand-alone so you won’t feel lost. Start with When We Met, the first book in this year’s trilogy.”

This newest addition to the series follows the story of Taryn, a tough-talking sports PR woman, and Angel, a former special ops agent who targets her for seduction, according to the summary.

“I am not woman enough for a man like Angel,” Mallery said in our interview when we asked her if anything in the book is based on personal experience. “He needed an ultra-confident, fearless woman like Taryn. If he had set his sights on me, I probably would’ve peed my pants and run away.”

RED HOT BOOK OF THE WEEK: Overseas by Beatriz Williams >>

Taryn, on the other hand, isn’t backing down. At first, that is. Angel just may be able to convince her that surrender might be better than being stubborn. Feisty, and we like it!

“Yeah, it’s that kind of book. Romantic, contemporary, quirky, laugh-out-loud funny and with some of the hottest scenes I’ve ever written. Can’t wait to hear what readers think of When We Met.”

Though Mallery might not like to have a real-life romance with Angel, she did gush about how much fun he was to write in her latest story. We don’t blame her. What lady doesn’t want a man who knows what he wants?

“Angel is alpha, the kind of man who never seems to have self-doubt. (He does, but he keeps it well hidden.)”

Mallery continued by saying she had fun coming up with a scenario that would make a man like that the most uncomfortable. You’ll have to read the book to find out which scenario Mayor Marsha charges him with. Let’s just say it may or may not have to do with casseroles and friendly neighbors.

Mallery did dish on her favorite moment from the book, “When Taryn reveals something very personal about her past to Angel, something she’s never told anyone, it’s a pivotal moment in their relationship. It’s when things go from ‘just sex’ to something much more meaningful for both of them, though they can’t admit it right away.”

It’s clear Mallery has as much fun writing her novels as we have reading them. Her writing process begins from the beginning. Page one, chapter one. She told us she can’t move on from writing until she perfects the first line. For When We Met, the one that stuck is, “We both know where this is going.”

Mallery obviously excels in romance, but she told us she’s always had a secret desire to write a World War II thriller. “I must’ve been a spy in a former life,” she told us.

For now, she’ll stick with romance and has no plans to slow down on writing anytime soon. Following When We Met, her next novels Before We Kiss and Until We Touch will be released in June and July respectively.

Mallery gets inspiration for her romances from some surprising places: NPR and conversations overheard at restaurants.

“There are infinite ways to meet and fall in love,” Mallery explained, “and I’ve never grown tired of the wonderful, comical, infuriating, delightful differences between men and women.”