He’s a man of many talents. Paul Wesley, who stars as Stefan on The Vampire Diaries, made his directing debut with tonight’s episode of the show. The verdict: He should direct more. 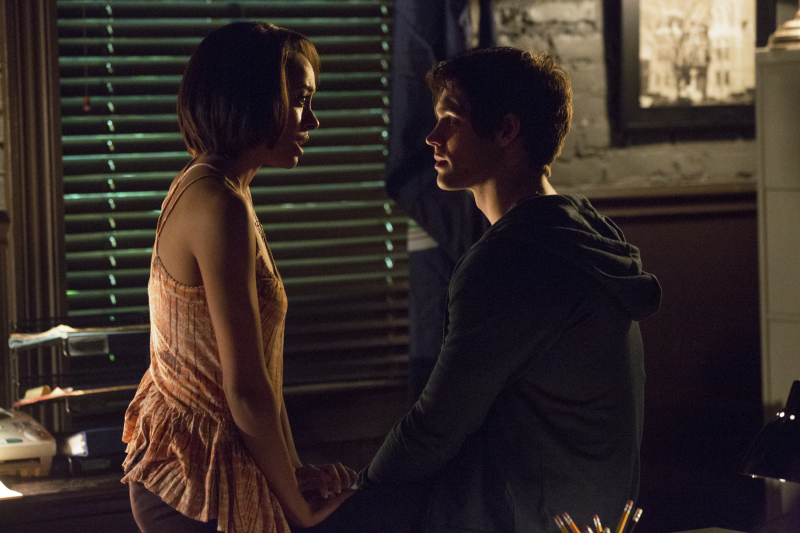 Stelena reunited for one episode only (for now, at least) tonight. And it just happens to be the episode Paul Wesley, the man behind Stefan Salvatore, directed. In a debut which is sure to solidify Wesley’s spot on the map as more than just a good-looking face, the actor added the new credit to his resume tonight with the episode titled “Resident Evil.”

Surprisingly, the focus seemed to pay homage to Elena (Nina Dobrev) and Stefan’s long-term relationship, which ended for the first time in Season 2. We get some great alternate reality moments including a look back at the couple’s first date and beyond with kids. Plus, this episode features cameos from Vicki and Kol. (Could he possibly make an appearance on The Originals too? We would, personally, love to see that happen.)

At this point, we want to pause and appreciate that little black box scene tonight. In the alternate reality, Elena finds a box hidden in a drawer on her anniversary with Stefan. We can all assume a ring is hidden inside, but she doesn’t open it, she just says ‘yes.’ There are a few reasons this was poignant. One, the scene had nothing to do with the rock and everything to do with the could-have-been relationship between Stelena. Two, it was the pinnacle moment I realized there was still a part of my heart that wanted these two to find their happily ever after. And three, Elena had the vision while sitting in real life with Damon (Ian Somerhalder).

It seems like Wesley is ready to put Stefan back on the map, as Elena’s main hottie squeeze. Not that we blame him. Damon has been getting quite a lot of attention lately as our favorite bad boy. It might be time for the noble one to make a comeback.

On to reality, Markos makes his grand (grander than last episode because this time we actually see his face) entrance. He’s responsible for their visions because he wants the blood of the doppelgangers. Still. Nothing brings two people together like the hope of true love. But it’s Damon to the rescue to rid Stefan and Elena of these horrible visions of happiness and peace. Because it ain’t real life. True story.

Do The Travelers remind anyone else of a supernatural version of an alien invasion? After discovering they’re taking over the bodies of the citizens of Mystic Falls, my mind flashed back to Men in Black. That is, after all, one science fiction creature the show has yet to tackle. We don’t think they’ll go quite that far, but The Travelers come close enough in our book. The body invasion thing is just plain creepy whether it’s otherworldly or, in The Travelers’ case, we’ll call it “otherplanely.”

“So having sex dreams about my brother.” — Thank you, Damon. No use beating around the bush on that one.

“I wonder if this is where Stefan and Elena had crazy vision sex. Eh, it’s probably the bedroom. Stefan’s pretty vanilla, but apparently that’s Elena’s favorite flavor.” — Enzo tells Damon and his face, in return, is priceless.

What did you think of Wesley’s directing debut on The Vampire Diaries? Do you think Stefan and Elena will get back together in Season 5?