Josh Duhamel learned the importance of volunteering at a young age from watching his mother help others in their hometown. The do-gooder now fills us in on his new collaboration with Advil, and how together they are helping people make a difference.

The last time we spoke with Josh Duhamel, he was saving puppies by promoting pet adoption. When we got the chance to chat with the big-hearted actor this week, he was headed to the Bronx to lend a hand revitalizing Franz Sigel Park. Clearly, of the many roles Duhamel plays, volunteer is a recurring one.

Of course, it’s a habit he comes by honestly — you could even say it’s in his blood.

“My mother was always very active in volunteering around town in my hometown of Minot, North Dakota, and I guess I learned it from her,” Duhamel told us. “Although, I never really realized how much I appreciated the tireless work she did until I started doing things myself.”

And Duhamel isn’t the only one who was instilled with a love of volunteer work at an early age. It’s a cause near and dear to him and his wife, Fergie.

“We both place a lot of importance on it,” he elaborated. “Both of our parents came from kind of the same background — her mother was a teacher and my mom was a teacher — and even now, her mother is very involved in the church that way, so I guess, just through osmosis or something, we learned that you can’t take things for granted. You have to give back however you can. I think that applies to everyone.”

Following in his mother’s footsteps, Duhamel has become quite the humanitarian. From organizing Red Cross relief efforts for Haiti and Japan in the wake of earthquakes, to putting on a benefit concert in Minot after flooding ravaged it, the actor devotes much of his time to helping others. As such, the importance of volunteerism is not lost on him.

“Over the last few years we’ve put on fundraisers, such as runs, for the businesses and people in the Los Angeles area to do something other than just writing a check,” he said. “It’s a way for people to actively get involved, and without all of the volunteers, we never would’ve been able to pull it off.”

Duhamel’s newest endeavor, then, is a natural fit. He has teamed up with Advil for the Advil Relief in Action Campaign, a unique movement aimed at “encouraging people to get out in their own communities and volunteer,” explained the actor. 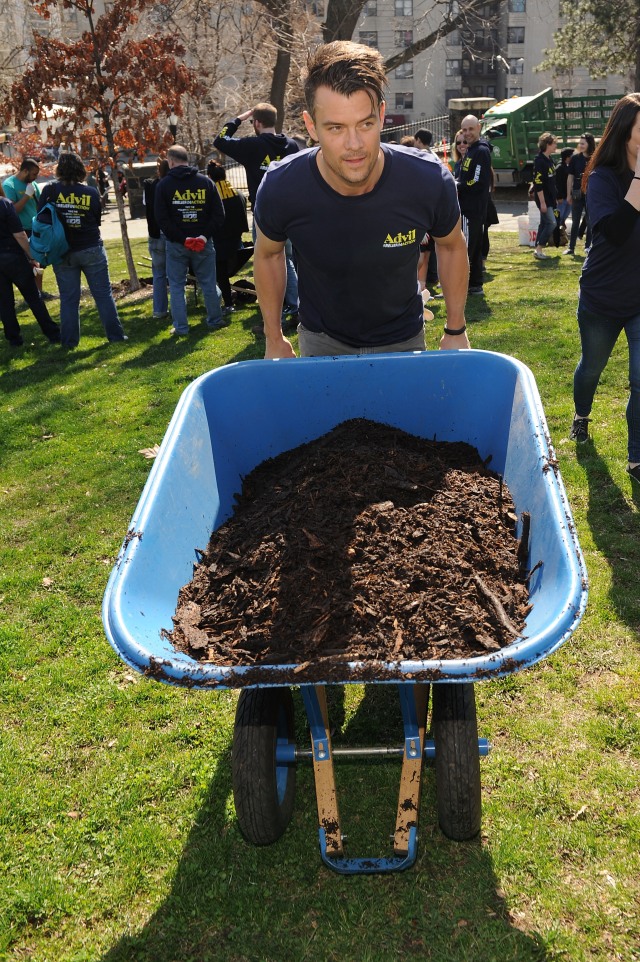 The premise of the campaign is simple and yet, in its uniqueness, groundbreaking. To bring relief to active volunteers throughout the year — and thereby keep them actively volunteering by relieving the physical toll that can come with it — Advil will be going cross-country with a “Mobile Relief Center.”

They’ll be dropping in at 100 stops, ranging from small-scale local efforts to major volunteer events, with Advil product samples, water bottles and more to support volunteers.

“To me, the Advil Relief in Action campaign means knowing that others are counting on you, and doing whatever it takes to help,” Duhamel explained. “That includes not letting pain get in the way of giving back.”

In addition to helping others, Duhamel has an ulterior motive for throwing his heart into charitable efforts: his nearly-8-month-old son, Axl Jack.

“I think the best way to teach is by showing, and I certainly want to get him involved in stuff like this as early as possible, like my mother did for me,” he revealed. “You know, it taught me a very valuable lesson: That we’re not entitled to anything, and if you really want to accomplish anything meaningful, the only way to do it is by having as many people helping as possible. And I’ve learned that firsthand over the last several years.”

When asked if raising a son has heightened his sense of urgency to do more, Duhamel confirmed that it does.

“The whole idea of parenting is that you do want to instill certain things in the kid and the last thing we want to do is raise a kid who feels entitled in any way. We want him to understand that it takes a lot of work and it takes the work of many to accomplish anything. So the idea is that when he is old enough and can start to grasp that, I want to take him to volunteer at all kinds of different things,” he said

As a (relatively) new daddy, an in-demand actor, a doting husband and, obviously, a pretty great humanitarian, too, Duhamel confesses that it can be hard to find time to volunteer — but stresses that it’s vital to make the time.

“Especially after the earthquake that hit Haiti, I felt like I needed to do something more than just put on a suit and go to an event,” he explained. “I wanted to actually actively do something, and that was when it really all started for me to, you know, start organizing things and get people to come out.”

Duhamel’s involvement with the Advil Relief in Action Campaign, he admits, benefits him as much as it does the volunteers and their causes. “At the end of the day, it feels better being a part of something like that… selfishly, it feels good to help.”