The blood moon brought the stars out to Twitter, and at least one spot-on spoof of Miley Cyrus. 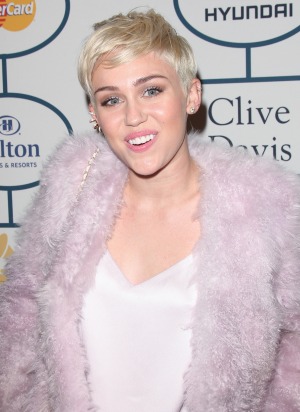 The lunar eclipse early Tuesday morning, April 15, resulted in a rare event called the blood moon. The moon was seen across most of North America, and social media was all a-twitter over the sight. The moon appeared to be red when it passed into Earth’s shadow for almost three hours very early on Tuesday (around 2 a.m. to 4:30 a.m. EST).

Celebs took to Twitter to share their excitement, but fans also used the opportunity to show their creativity (for lack of a better word), and one such post was about Miley Cyrus.

The singer’s “Wrecking Ball” video may have seemed like a good idea at the time, but it’s likely to follow her around for quite a while, and may even become a regret of hers (if that is even possible).

Cyrus also posted to Twitter to share her thoughts on the blood moon, although nothing nearly as interesting as the fan’s posting.

Miley Cyrus on being single: I’m fine alone in bed >>

Many other celebs did the same.

It's a clear night in LA go check out the eclipse right now it's amazing!!

Skrillex, Usher and Diplo took a photo of themselves in front of the moon.

Best blood moon pic we've seen from any camera tonight courtesy of one of you guys. Wow. pic.twitter.com/3kRNQW4blD

look at the moon animals.

nothing more curious than the night sky

Tell us: Did you see the blood moon Tuesday morning?