After starring together in their new film Neighbors, Zac Efron and Halston Sage are now reportedly dating. 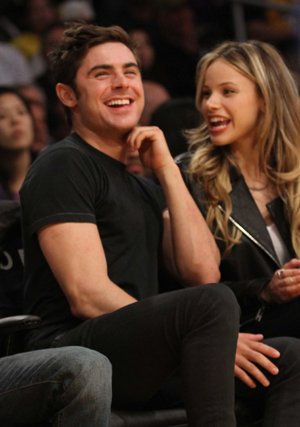 Neighbors costars Zac Efron and Halston Sage are reportedly dating after they began seeing each other while filming their new movie.

Efron may have displayed his sexy abs to all his fans at the MTV Movie Awards, but the well-sculpted hunk is reportedly off the market and in a relationship with the pretty actress, E! News reported. “They are definitely an item,” a source told the site.

“They were seeing each other a bit during filming of their movie together and ever since he went to rehab they got a lot closer,” the source added. “Her friends love him and say he is so sweet. He’s really good to her.”

Efron and Sage first made headlines when they were spotted having a blast at a Los Angeles Lakers game earlier this month. At the time, Sage was believed to still be together with Glee‘s Chord Overstreet, but soon after photos of her and Efron at the game came out, the former couple announced their split.

Before her relationship with Overstreet, Sage had also been linked to current Dancing With the Stars contestant James Maslow of Big Time Rush.

Though Efron and Sage might be a new couple, the High School Musical star went solo to the MTV Movie Awards. The hot actor even kissed a girl in the audience before showing off his naked chest to the crazed audience.

Efron admitted that he wouldn’t have pulled off the shirt-ripping stunt on his own without the help of Rita Ora. “@RitaOra Thanks for such a bold move. I don’t know if I could’ve done that on my own,” the 26-year-old tweeted after the awards.

While the audience seemed to love it, some fans were critical of the awkward abs display. Efron himself seemed slightly uncomfortable during the ordeal, looking somewhat unsure about it. Perhaps being attached to Sage made the half-naked move less appealing.