Miley Cyrus is still grieving the sudden death of her beloved pet Floyd, and now she has decided to give away her new puppy Moonie.

Miley Cyrus was left devastated after the sudden death of her beloved pet pooch Floyd, and it appears the pop star has still not quite recovered from her pet’s death earlier this month. 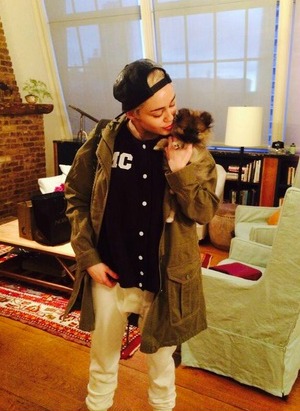 Cyrus told fans of her heartbreak on April 1, when her Alaskan Klee Kai passed away. The “Wrecking Ball” hit maker took to Twitter to express her sadness.

“Today is the 2nd worst day of my life. I don’t wanna say it because I don’t want it to be real…I am broken,” she said.

And in an attempt to mend Cyrus’ broken heart her mother Tish Cyrus surprised her with a brand new puppy to take Floyd’s place.

However, the adorable little puppy named Moonie will now be getting a new home because the 21-year-old star is just not ready to have a new dog.

Cyrus took to Twitter to share the news with her fans on Sunday, writing, “Moonie, thank you for giving me so much love, comfort & peace. It’s just too soon for me right now. #missingmoonie”

When a fan asked about Moonie’s well-being, Cyrus replied, “My friend’s mom who has a tiny pup 4 him 2 play with Molly. After what happened I’m scared 2 have a tiny dog (sic).”

Cyrus is a massive dog lover, and her pets are like her babies, so it is not surprising that she is battling to come to terms with the loss of her beloved Floyd. Earlier this month, and shortly after the death of Floyd, the singer broke down in tears on stage while singing Fleetwood Mac’s “Landslide.”

We hope Cyrus feels better soon and does not have to deal with the death of any more of her beloved pets in the near future.