Some of what Queen Bey implied in her drunkenly-delicious video for “Drunk in Love” is taken literally in Cody Simpson’s music video. 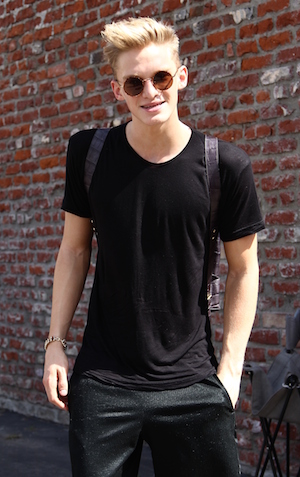 How do I even begin? Cody Simpson’s video has rendered me dumbfounded.

Was Kylie Jenner dumbfounded when Simpson made fun of her? >>

You won’t know what is hitting you, while it’s hitting you. But, perhaps, if I had never heard of Beyoncé, my view would be different.

If you’ve seen “Drunk in Love,” or have heard it one of the thousands of times it’s been played on the radio, you’re probably familiar with the provocative reference to “surfboard.”

The video was so hot it was banned in some places >>

It’s a newly-named sexual position (or is it?) and one that Beyoncé has made infamous this year. So, when I saw that Cody Simpson had a music video for a track called “Surfboard,” my heart sunk, just a wee bit.

When you take a term made popular by a heavyweight diva like Mrs. Carter, you’re almost parlaying some of the success from it. It’s like “surfboard” is branded by Queen Bey.

I mean, if Taylor Swift sang a song about the exotic fruit Jabuticaba and it became famous as a result, what would you expect from a later-released song named “Jabuticaba” by Rick Ross? We all would be intrigued, to say the least.

But, hold on, does Simpson really use “surfboard” the way Beyoncé does? All doubts are dispelled when you watch his quintessential Cali-boy music video.

He definitely makes overt references to “riding his surfboard,” and though he spends a significant amount of time polishing a literal surfboard, his message is clear.

Your initial thoughts will likely be the same as mine: You want to hate it. But keep watching. I developed a strange fascination and was able to maintain that interest all the way through. How is it possible that Simpson’s talking about the same naughty “surfboard,” yet the song is so unlike the Beyoncé and Jay Z hit?

Anyway, an adorable factor is the video stars his real-life, stunning girlfriend (did I mention she’s a model?). She seems pretty genuinely interested in riding his surfboard. Heck, by the end, I was questioning if I want to be on that surfboard.

Check out the video here.