Ice Cube is crying foul over his 2014 MTV Movie Awards loss. Someone apparently thinks it isn’t fair late actor Paul Walker won the award they were both up for. 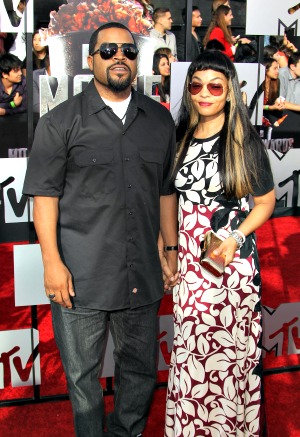 Paul Walker fans and sensible minds alike are none too happy to see Ice Cube ranting he was “robbed” of an MTV Movie Award by the late actor.

The rapper, seen here at Sunday night’s event alongside wife, Kimberly Woodruff, has angered many by complaining about losing to the star, who died in a fiery crash last November.

Awkward moments you missed at the MTV Movie Awards >>

“We was robbed,” 44-year-old Ice Cube told USA Today hours after the festivities ended. “Shame on you, MTV.”

While he and Kevin Hart had been up for an award for their roles in Ride Along, the gilded popcorn ended up going to the late actor and Vin Diesel for their work in Fast & Furious 6.

“We had the best chemistry of everybody nominated, for us not to win was crazy,” Cube, whose net worth is estimated to be in the neighborhood of $140 million, added of his role with Hart. “We were the best onscreen duo, period.”

The comedic actor added of Walker, “They should have gave it to him before he passed away.”

Along with his heap of hurt feelings about losing to Walker, Ice Cube vented about the ceremony as a whole.

“I just wasn’t into it,” he explained of the MTV Movie Awards. “I have been going in and out of these things for 25 years. If you ain’t into it, why torture yourself? As soon as you get bored, get up and leave.”

A gay man’s perspective: Zac Efron gets naked at the MTV Movie Awards >>

Monday evening, Ice Cube tried to address the controversy with the following series of tweets:

Do you think Ice Cube is being respectful to Paul Walker’s memory, or not?