Pharrell Williams sat down with Oprah Winfrey to discuss all things “Happy” and the talk show host had a surprise that brought the recording artist to tears. 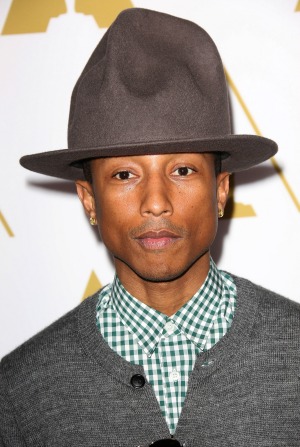 Pharrell Williams chatted with Oprah Winfrey recently to talk about the success and inspiration behind his latest single, “Happy,” and in true Oprah fashion, the interviewer had a surprise that brought about a strong emotional response from the superstar.

“Zero air play. Nothing,” Williams said of “Happy,” wearing his now iconic hat. “And then the next thing you know, we put out the video on November 21st, all of the sudden… boom. I mean, when I say boom, I mean, boom. And we were like, ‘What’s happening?’ OK, first of all, people are putting up their own videos. It was like, no longer my song.”

“I think we actually have a tape,” replied Winfrey. “Can we roll the tape of that? When people started putting videos around the world of themselves gettin’ happy.”

Cue the touching video of men, women and children in places across the planet, from Detroit to Malawi, dancing and sharing their joy with the rest of the world. Williams quickly goes from calm and collected to speechless and sobbing with happiness.

Just as the singer was starting to pull himself together, Winfrey threw in, “I know. It makes me cry, too. You know, I was just thinking about your grandmother. I bet she didn’t even imagine that.” Come on, Oprah! You already got him crying, and now you’re gonna pull the grandmother card?

“Why am I crying on Oprah?” Williams rhetorically asked with a teary smile as Winfrey handed him a tissue. “It’s overwhelming because it’s like, I love what I do and I just appreciate the fact that… people that believed in me for so long that I could make it to this point, to feel that.”

Williams has a lot to be inspired and happy about right now in his own life. His career is huge with the success of “Happy” and “Blurred Lines,” and he is set to step in as a judge on The Voice in place of CeeLo Green. His love life isn’t doing so bad either: Williams wed longtime girlfriend, model Helen Lasichanh, in October.

“I get it,” said Winfrey. “I really get it. I so now get why it’s so infectious, because it came from such a clear space. That the energy was absolutely uninterrupted by anything other than allowing it to flow from heart to heart. And that’s what happens when you see it.”