The man has some moves. Leonardo DiCaprio proves he’s more than just an actor as he shakes his booty at Coachella. 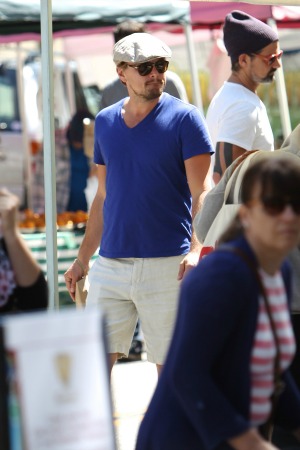 This past weekend was the first weekend of Coachella, the annual music festival in Indio, California. Each year, celebrities swarm to the desert to listen to music under the hot sun wearing their finest hippie fashions.

This year, Leonardo DiCaprio made an appearance and he made quite a splash — not for showing up, but for busting a move or two out on the grass. While his face is never captured in the clip, the man dancing is wearing the same exact outfit The Wolf of Wall Street actor was spotted in earlier in the day.

World is shocked as Leonardo DiCaprio loses to Josh Hutcherson >>

According to E! News, he showed up to the Desert Pool Party at the Bootsy Bellows estate wearing a white polo shirt, sunglasses, blue-checkered shorts and his infamous cap that he is often captured sporting by the paparazzi. The dancing man wears that same exact outfit in the video.

The 14-second moment to remember shows DiCaprio swaying his hips to the music. The fan shooting the video then swings the camera to her face with her mouth agape because she cannot believe what she is witnessing.

The best part is the kick with the right leg followed by a swinging karate chop to the left. It also appears he is dancing with another attendee as the music plays. There’s nothing better than having fun and enjoying yourself at a music festival.

Clearly, the actor was dancing like no one was watching… even though they were.