In his career, Mark Wahlberg has been a rapper, an actor, an underwear model and a producer. And after last night’s MTV Movie Awards, you can add F-bomb-dropping extraordinaire to that list. 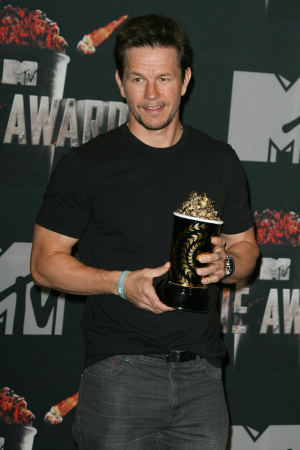 It’s been more than 20 years since Marky Mark and the Funky Bunch took the world by storm, and in the two decades since they began bringing forth the rhythm and the rhyme, we’ve seen the “Good Vibrations” group’s hunky former frontman, Mark Wahlberg, evolve from rapper to underwear model to A-list actor.

And as of last night, he’s also the recipient of the MTV Movie Awards’ Generation Award.

But according to the 42-year-old Lone Survivor star, that isn’t necessarily a good thing.

“I know what this really means. Many people have gotten this award before — Jim Carrey, Ben Stiller, Adam Sandler, Jennifer Aniston, many others — and you know what they all have in common? None of them are invited back! They’re all f*****g old!” Wahlberg joked when he took the stage to accept the show’s highest honor.

Don’t feel too sorry for the sarcastic actor, though. Wahlberg admits his career has been charmed.

“It was a great run, and I’m a lucky guy in so many ways to have worked with so many talented people,” he said, “to have gone from literally being incarcerated to having a one-hit rap career to having an underwear modeling career to getting a real chance from Penny Marshall.”

World is shocked as Leonardo DiCaprio loses over Josh Hutcherson >>

Despite his impressively explicit language, however, Wahlberg wrapped up his acceptance speech on a positive note. In addition to saying he was “truly blessed” to have an extraordinary life, the actor gave shout-outs to his wife (“the most beautiful woman in the world”), boxer Manny Pacquiao, golfer Bubba Watson, his Entourage entourage and God.

“It’s also Palm Sunday, so God bless you all. I love the Lord, I love you guys, I love my wife and my family, the real entourage… thank you guys.”