Backstreet Boys star Nick Carter married Lauren Kitt during an intimate and emotional ceremony on Saturday. But why was Nick’s younger brother Aaron Carter a no-show? 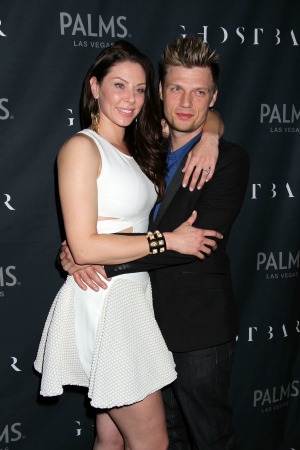 Backstreet Boys star Nick Carter is officially off the market! Carter and his fiancée, fitness expert Lauren Kitt, were married at the Bacara Resort and Spa in Santa Barbara, California, on Saturday.

The very happy couple said “I do” underneath an altar of white roses and hydrangeas with purple accents, according to Us Weekly.

Paris Hilton denies she was a bad influence on Nick Carter >>

The picturesque location was not the only breathtaking part about the ceremony, however. According to the publication, Kitt looked stunning in a strapless white gown complete with a bouquet of white roses, anemones and peonies. The “As Long As You Love Me” hit maker looked slick in a black tuxedo.

However, one famous face who was not there was Nick’s younger brother Aaron Carter. According to the Daily Mail, Aaron’s rep Steve Honig claims Aaron never planned to attend the ceremony because of “a contractual obligation to appear in the Cherry Blossom Parade in Washington, D.C.” Although, Honig insists the 26-year-old singer’s plans had been made before he knew of his brother’s exact wedding date, and there is no ill feeling between the brothers.

The couple’s big day took place a year after the 34-year-old singer asked his lady to marry him. The pair had been enjoying a getaway together when Carter surprised Kitt with a 7-carat diamond bauble on a small island near the Florida Keys in February 2013.

The answer was yes, and the couple’s relationship has continued to blossom, which was evident in their deeply personal and loving vows. According to a source at Us Weekly, the moment the couple exchanged rings was very heartfelt. “Lauren held Nick’s hand and dried tears from her eyes,” the source said.

Nick Carter a no-show at his sister’s funeral >>

“At the end of the ceremony they shared the longest wedding kiss I’ve ever seen. A full minute later they were still kissing. They seem crazy in love and thrilled to be married, ” another source revealed to the publication.

And there’s good news for Backstreet Boy fans, too. They will be treated to a special TV viewing of the nuptials because the entire ceremony was filmed for a made-for-TV special.

Congratulations to the happy couple.