The Real Housewives of Orange County returns to Bravo for a ninth drama-soaked season on Monday, April 14, and longtime star, Tamra Judge, is back with a new husband, a new outlook and, you guessed it, new feuds. We caught up with the OC’s self-proclaimed hottest housewife to get the scoop. 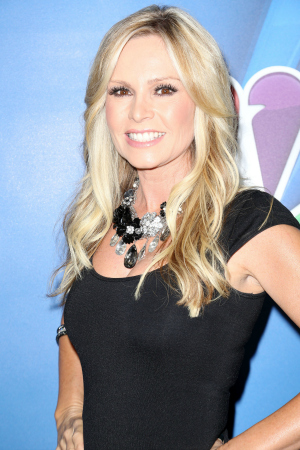 When Tamra Judge joined The Real Housewives of Orange County back in Season 3, she was Tamra Barney, a real estate agent from Ladera Ranch, who touted her husband, Simon, as the family’s primary breadwinner.

But times have changed. On the eve of the reality show’s ninth season, Judge is a new woman.

For starters, she received her own spin-off last year — a three-part series called Tamra’s OC Wedding, which chronicled her lavish nuptials to fitness expert, Eddie Judge.

The newlyweds truly do spend a lot of time together — their day-to-day life includes running their boutique workout facility, CUT Fitness, at which Tamra teaches and takes classes. And, although word has it Tamra expresses insecurities this season about her hunky new husband working out with so many beautiful, young women, don’t expect to see too much drama stemming from the low-key couple.

“We’re in a good place,” Tamra asserted, “We love being together and we’re still so happy to be with each other. I mean, he’s 40 and I’m… something. (Laughs.) It’s just… we don’t have a whole lot of pressure. We’re not teenagers or in our 20s wanting to settle down and have kids. We’re just in a really good place in our lives.”

What you likely will see, however, is lingering tension between Tamra and her ex. The former couple has been feuding as of late over the presence of their three children, Sidney, Spencer and Sophia, on the show — a subject that is especially sensitive for Tamra.

“You know, I’ve actually had a pretty brutal year, except for being married and all that stuff… I’ve had a pretty hard time with my ex,” Tamra lamented. “I call him the gift that keeps on giving — he just doesn’t let go. And as much as I don’t want to dwell on it, it bothers me. Anything to do with my children, it bothers me!”

And what you will most definitely see are heated arguments among the show’s resident housewives. This season, Tamra and fellow veterans, Heather Dubrow and Vicki Gunvalson, are joined by two entirely new housewives, Shannon Beador and Lizzie Rovsek.

When asked whether or not she got along with her new cast members, Tamra responded diplomatically. “I’m trying to get to know them — I can’t say that I honestly fully know them. I gave them a chance. I hit it off with both of them in the very beginning, but then you get to know somebody and you’re like, ‘I don’t know that I like her that much,’ or ‘She’s a little bit weirder than I thought.’ You’ll see the natural transition of getting to know somebody and becoming friends with them and then realizing, like, this girl’s crazy.”

Having gotten the casting ax this season, Gretchen Rossi, Alexis Bellino and Lydia McLaughlin won’t be returning… and Tamra, for one, isn’t sad to see them go.

“I think a lot of things about Gretchen weren’t shown on the show, a lot of things that I knew,” elaborated Tamra. “I mean, I brought them up every chance I could, but, of course, she would never admit to anything. I tried to move past it and be friends with her, but her and Slade are just not my kind of people.”

Not surprisingly, Tamra feels as though the decision not to bring back Gretchen, Alexis and Lydia was a wise one on the part of the network.

“Ultimately, they’re not on the show anymore,” she said. “I think that it’s good to shake up things every once in a while. You can’t have the same argument every single season. So they keep the good ones and get rid of the bad ones.”

Still, even without Rossi and the other girls, Season 9 of The Real Housewives of Orange County won’t be without troubles for Tamra. “My oldest son is on the show a lot more with me this season,” she revealed. “He’s facing some health issues, and we’re dealing with it.”

But, if anything, the new season — which also focuses on “the new girls and how they interact” — proves that the O.C.’s original hottest housewife can’t be held down for long.

“I have a rough incident, and normally I don’t let people break me down, but you see me just broke down… and how I get back on my feet.”