As Mad Men Season 7 kicks off, SC&P’s key players are jet setting across the country. They’re not exactly leaving smiles in their wake or coming home to wine and roses, though. 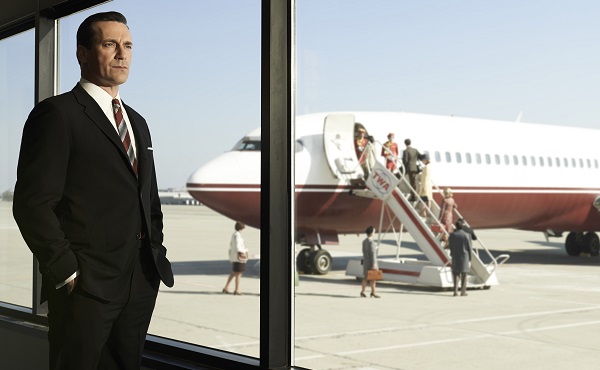 Nothing is smooth going for anyone at or associated with SC&P during Mad Men‘s Season 7 premiere. That point is best illustrated in a snippet of President Nixon’s first inaugural speech, which plays on one of the many televisions in Don Draper’s life. “We have found ourselves rich in goods, but ragged in spirit,” the new president announced at the start of 1969. Accurate much?

Catch up: Where we left off last season >>

In the Season 7 premiere, we go quite some time without seeing Mr. Draper (Jon Hamm), a departure from how things have been done in the past. When we do, he’s landing in California for a few days to spend time with Megan, whose career is flourishing. You’d think he’d look happy as the people mover carries him toward his wife, right? Instead, the ad man looks forlorn. Why?

It might have something to do with how we left him in Season 7 or the fact that, some time later, Megan is still entirely unaware that her husband isn’t technically working for SC&P right now. Multiple times he tells her that he has to work, but he never actually does. In California, “working” means doing lunch with the now California-based (and supremely tan) Pete Campbell and checking out the office digs. All while Ted is conveniently back in New York on business. When he’s not gallivanting around town with Pete, Don spends his time drifting in and out of sleep in front of his television, the wolves/dogs/coyotes howling outside the rustic California home Megan insisted on having. Of all the lies Draper has told his wives, this one seems like the most forgivable.

Which Draper moment made the must-watch moments of 2013? >>

And, yeah, Don is lying to his wife about his work schedule, but he seems to have (perhaps) turned over a new leaf in their relationship. Has he finally changed his womanizing ways? All signs point to a “maybe.” On a red-eye back to New York, Don finds himself seatmates with a gorgeous brunette (played by Neve Campbell). During their flight, they spend time flirting shamelessly and she even falls asleep on his shoulder. When she invites him to carry on their closeness after disembarking, Draper declines. He has to get “back to work.” In New York, “work” means feeding Freddie ads. Freddie, working as a freelancer, takes them to Peggy for the various SC&P campaigns. There’s the tricky bastard Don Draper we know and love!

Sadly, Peggy’s new boss, Lou Avery, is kind of an idiot. He quickly poops all over Draper’s big idea for a watch campaign in lieu of something far more predictable and boring. Based on Peggy’s annoyance, it’s obvious this isn’t the first time she’s butted heads with Lou. It’s worth wondering: Would he nix the ideas if he knew they were coming from Don? Hell, would he even be more open to them if they were just coming from any man, instead of Peggy (Elisabeth Moss)?

That time Christina Hendricks’ curves made someone crash >>

Peggy’s tense working relationship with Lou isn’t her only issue right now. After all those awkward and unsexy sexually charged moments with Ted, he’s left for California with his wife. When they finally run into each other during his visit to the office, it’s kind of awful. Thank goodness. If we have to watch them hook up again, we might puke. Sadly, her relationship with Rizzo seems equally messy thanks in part to her stupid affair with Ted and the way stress turns her into a ball of fury no one wants to deal with. All we want is for Peggy and Rizzo to end up happily ever after, but Season 7’s premiere makes it seem unlikely. When we leave Peggy at the end of the episode, she’s sobbing on the floor of her apartment. Not good at all.

Meanwhile, if Joan (Christina Hendricks) can’t pull things together with the shoe company, we’re likely to see her sobbing soon enough. Overwhelmed by all the work on his plate while everyone is traveling, Ken unloads a meeting with Butler Footwear’s head of marketing, Wayne Barnes. Wayne (played by Cougar Town‘s Dan Byrd) is, of course, miffed by the snub from Ken. He also has an MBA and quickly makes Joan realize she’s still playing in the minors and not at all ready to handle him. With the help of a kindly professor, Joan later manages to score a point or two on Wayne, but she hasn’t fully salvaged Butler’s business, yet. She still needs to convince Ken to sit down with Wayne. Easier said than done, right?

What fate lies ahead for SC&P and all of its various players? We have the rest of Mad Men‘s split final season to find out. Something tells us we should expect turbulence ahead.