We can’t believe they finally did it. Lannister crimson all over the place thanks to The Purple Wedding on Game of Thrones. It was awesome. 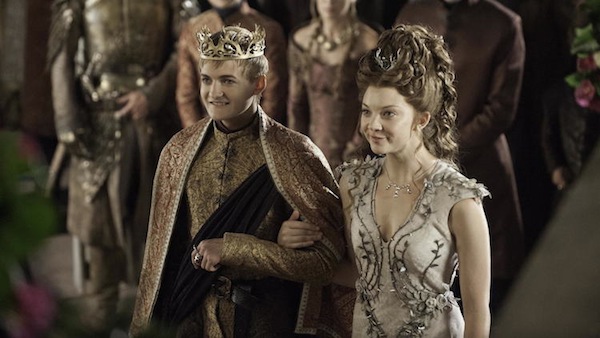 No spoiler alert could ever be as dramatic as The Red Wedding reviews, but tonight’s episode comes close, so read on at your own discretion. You have been warned.

It’s tempting to make this review for Game of Thrones tonight one sentence because, while a ton of amazing things happen, one trumps them all: Joffrey is poisoned right after his wedding. And no one is sad about it, except maybe Cersei (Lena Headey).

This brings up a host of questions that lead us into the new season: Namely, who killed the king? Here are the most obvious suspects:

Another key question, what does all of this mean for Margaery. Tommen is now the heir to the throne, but Margaery and Joffrey didn’t consummate their marriage before he died, which makes the poor girl the most hopeless virgin ever.

“You lost a hand, not a stomach,” Tyrion tells Jaime when he won’t eat with him.

“Better her than you,” Tyrion says to Sansa as Margaery and Joffrey are wed.

“Now go drink until it feels like you did the right thing,” Bronn tells Tyrion after he sends Shae away.

What did you think of Joffrey’s death tonight? Who do you think killed him?