From the opening monologue to the credits at the end, the 2014 MTV Movie Awards were severely underwhelming. So what made them that way? 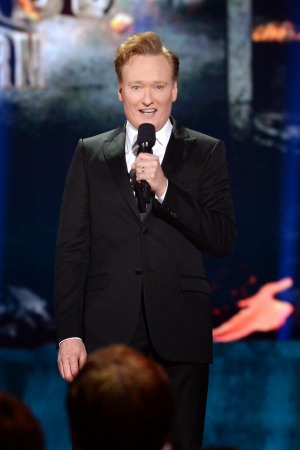 The 2014 MTV Movie Awards ushered in the beginning of the warm-weather awards season. While MTV normally does everything in a somewhat quirky and fun manner, the 2014 awards show felt overdone and therefore underwhelming.

Conan O’Brien as host was OK as far as hosts go. O’Brien can never not be funny, and he did what he does best at the show. But his performance felt a little too prepared, although it was still one of the best things about the show.
O’Brien started his monologue with “50 Cameos,” but not much else. He quickly went around trying to find 50 celebs to be in the video. His opening monologue wasn’t much better. He attempted to sing a song about why it would be awful if he sang a song (“I don’t think your time should be wasted tonight by me doing a song. In fact, I wrote a song about it”), and he was right. Besides a few good jokes, the monologue seemed to fall flat with the audience.

But the rest of the show wasn’t any better. Seth MacFarlane and Amanda Seyfried set the mood for the night. The two stuttered through their entire presentation, and MacFarlane had a quote that may have described the entire show.

Referring to his own award-show hosting experience, he said, “So far, this is going just like the Oscars.”

There were some good moments as well: namely, Zac Efron taking his shirt off… Actually, the MTV Movie Awards’ biggest moments were their preplanned awards, including the Trailblazer Award, given to Channing Tatum, and the Generations Award, given to Mark Wahlberg. The performances also helped move the show along.

Rihanna and Eminem performed their song “Monster” to the delight of the crowd. Both are amazing performers, and they obviously know how to hold a crowd. It helped bring the energy up in the room. Ellie Goulding and Zedd’s performance did the same, and thankfully it was spaced out enough from RiRi and Em to again wake up the crowd.

Overall, the show was disappointing (despite a few great moments), but it’s always good to see your favorite stars all in the same place. And apparently that is all we can ask from our award shows these days.