Twitter is alive and kicking with emotional reactions from the exclusive clip shown during the red carpet segment of the MTV Movie Awards. 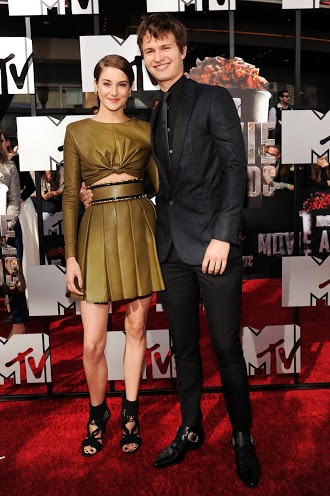 MTV aired an exclusive scene from The Fault in Our Stars at tonight’s MTV Movie Awards red carpet segment.

The stars appeared to present the clip. Shailene Woodley wore a military-inspired camo green skirt and top knotted to mimic a triangle cutout on her tummy, clearly not revealing a baby bump like Snooki and JWoww. Ansel Elgort looked lean and luscious in his black-on-black skinny suit.

When MTV showed the clip, the Twittersphere went crazy! Some people even admitted the only reason they were watching the MTV Movie Awards was that they wanted to see the clip.

The tweets ranged from fangirling to emo to philosophical. Here are just a few:

Oh, Kate — don’t be ashamed, we’re all looking forward to the movie!

The Fault in Our Stars is based on the beloved young adult novel of the same name by John Green. It stars Shailene Woodley, Ansel Elgort, Willem Dafoe, Sam Trammell and Laura Dern.

We’re predicting a rise in Kleenex sales in the beginning of June, because who doesn’t like to have a good cry? And if anyone can rock an oxygen tank as a clothing accessory, it would have to be Shailene Woodley.

We also loved the metaphor quote. When Gus pulls out a cigarette, Hazel goes off on him about why he would give his money to a company that sells cancer-causing products. Ever so witty, Gus said, “It’s a metaphor, see. You put the thing that does the killing right between your teeth, but you never give it the power to kill you.”

The Fault in Our Stars premieres June 6.