Hulu is jumping on the original content bandwagon with new supernatural comedy Deadbeat. Here’s everything you need to know about this quirky guide to New York City ghosts. 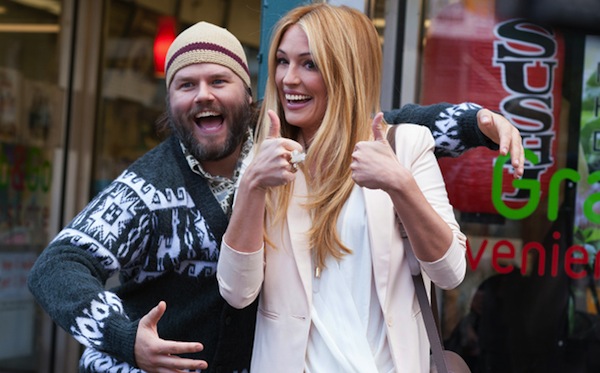 If you’re looking for a way to kill a lazy afternoon with a bowl of buttered popcorn, Season 1 of Deadbeat on Hulu Plus has got you covered. Quirky and goofy, the 10-episode season pairs perfectly with unhealthy snacks and beer. Don’t expect too much depth. The show often walks the fine line next to offensive territory, but if you’re looking to turn off your brain for a while and zone on the couch like a teenager, this is your show.

Tyler Labine stars as Kevin, a downwardly mobile New Yorker who is a powerful medium with absolutely no motivation. He does what he must to pay rent but otherwise has no interest (or maybe it’s sheer laziness, not lack of interest) in banking on his abilities.

Instead, he’s much more interested in getting a date with Camomile (Cat Deeley), a fraud who only pretends like she can see the spirits Kevin can. Also working against Kevin is that Camomile despises him.

With his complete and utter lack of motivation in check, Kevin puts in his very least effort to help stubborn spirits with their unfinished business, if only so they’ll leave him alone. From there, you can only imagine the kind of shenanigans that ensue.

This show fits nicely in with the slacker genre we see so prevalent today. I could easily see a 16-year-old boy watching this show, and for those who are seeking out that kind of humor, the show is worth the time as long as you have it to spare. It is lighthearted and oh-so-silly.

Labine is charming as Kevin and sells the character well. As for Deeley, this marks her biggest entrance into scripted television after hosting such well-known shows as So You Think You Can Dance. She brings the same enthusiasm to this role and works it with a carefree attitude. The two paired together give a good dynamic to the show.

Kevin is like the medium version of Seth Rogen in Knocked Up, only not quite as endearing, unfortunately. While Labine and Deeley manage to make the story work together, the writing often falls flat. The humor will make you giggle but often leave you with something to be desired. It’s crass and sometimes not in a good way. The show definitely has potential, as the premise is really interesting. It just doesn’t quite deliver the high note we wanted it to.

Connect with the show

No word yet on Hulu’s plans for Season 2. You can keep up to date with the show online.

Have you watched Deadbeat on Hulu Plus yet? What are your thoughts on the show?