Conan O’Brien isn’t worried about competition from other networks this Sunday because his MTV Movie Awards show will be powerful. 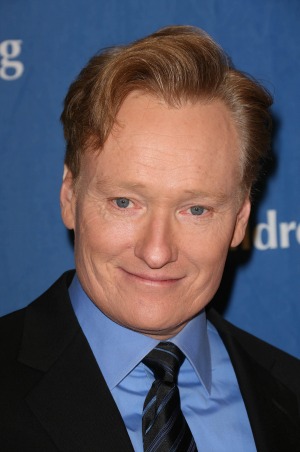 The 2014 MTV Movie Awards and host Conan O’Brien certainly have major ratings competition this Sunday in the form of Mad Men‘s sixth and final season premiere and a brand new episode of HBO’s Game of Thrones. But O’Brien isn’t sweating it because he says his show will blow the others out of the water, according to The Washington Post.

“Game of Thrones is a complete waste of everyone’s time. The dragons attack everyone and eat their face on Sunday night. That’s what happens, so don’t even bother watching,” O’Brien said while taking a break from rehearsing for the awards show. “Mad Men? Yawn. OK. Somebody had too much to drink and slept with somebody. Whatevs, OK? MTV Movie Awards, that’s the show to watch.” Burn! After that comment, it’s doubtful Mad Men’s Jon Hamm will be willing to act as O’Brien’s Secret Santa gift to a Conan staffer this year, as he has before.

Instead of dragons and boozy ad execs, the late-night talk show funnyman promises flames, and he’s not talking about his luscious red locks. The show will feature tons of special effects on the apocalyptic-themed stage, says the Conan host.

“It’s the most flames I’ve ever been around in my life,” he said. “I’ve been working in show business for a long time, and every single part of the set explodes into flames at one point during the show.” Apparently there will be a 5,000-pound box of fake movie popcorn ablaze as well.

And the nudity O’Brien is promising? Buckle up, because he’s talking about himself. “I’ve been preparing for this job for years,” he said. “I knew I’d be doing the 2014 MTV Movie Awards, so I’ve been doing a series of isometrics, underwater exercises, Pilates and Greco-Roman wrestling, which had no benefit to my body, but I strangely enjoyed it. My body is in incredible shape, and you might be seeing some of that on the show.” This will be everyone’s chance to see if Chelsea Handler wasn’t joking about her recent ringing endorsement of O’Brien’s hot bod.

Flames. Apocalyptic stage. Naked bodies. Are we talking about the MTV Movie Awards or Burning Man?

18 mins ago
by Alicia Kort