Nirvana, Kiss, Peter Gabriel, Hall & Oates, Cat Stevens and Linda Ronstadt have been inducted into the Rock and Roll Hall of Fame. 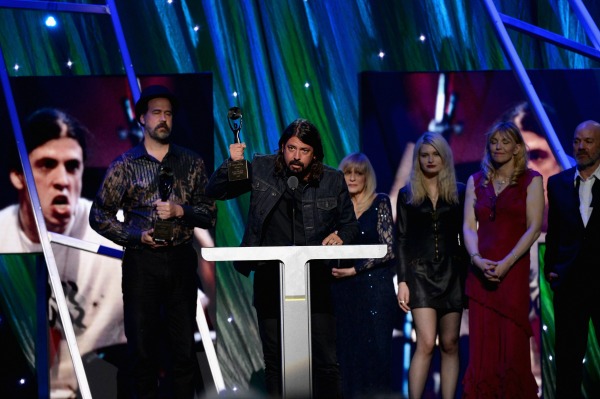 Four bada** women, including Joan Jett, Lorde, Kim Gordon and St. Vincent took the stage in place of the late Kurt Cobain last night as Nirvana was inducted into the Rock and Roll Hall of Fame.

Playing the iconic grunge band’s hits “Smells Like Teen Spirit,” “All Apologies,” “Lithium” and “Aneurysm,” the ladies gave a new twist to old hits while still honoring the greatness of the songs.

R.E.M. lead singer Michael Stipe, a close personal friend of Cobain and wife Courtney Love (she is said to have inspired the song “Crush with Eyeliner”), gave a heartfelt speech about the band’s musical legacy.

“Nirvana were artists in every sense of the word,” Stipe said. “Nirvana tapped into a voice that was yearning to be heard. Nirvana were kicking against the mainstream. They spoke truth and a lot of people listened.”

“They were singular and loud and melodic and deeply original,” Stipe continued. “And that voice. That voice. Kurt, we miss you. I miss you. This is not just pop music. This is something much greater than that.”

Courtney Love, for one, kept things short, sweet and classy. “You know, I have a big speech, but I’m not going to say it,” she explained before hugging everyone on stage, including Nirvana band members Dave Grohl — with whom she has famously feuded — and Krist Novoselic, as well as Cobain’s mother, who she once blamed for pushing daughter Frances Bean into filing a restraining order against her.

“That’s it,” Love said. “I just wish Kurt was here to hear this. Feel this. Tonight, he really would have appreciated it.”

Cobain died of a self-inflicted gunshot wound 20 years ago.

The iconic grunge band was inducted in their first year of eligibility, joining Kiss, Peter Gabriel, Hall & Oates, Cat Stevens and Linda Ronstadt in the Class of 2014.