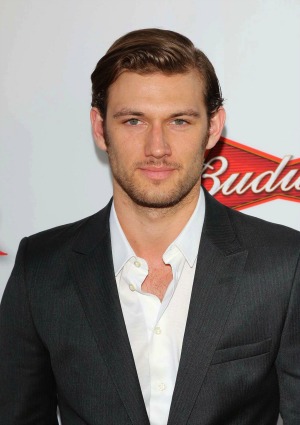 There’s good news for Alex Pettyfer’s love life because he has apparently found himself a beautiful new lady. That’s right — the Magic Mike actor‘s off the market once more and is officially dating Sports Illustrated model Marloes Horst.

“Marloes and Alex have been together seriously for a few weeks now. They are very much a couple,” Horst’s agent from Next Model Management revealed to E! News. “They are really happy.”

It may still be early days for the couple, but we’re glad to hear Pettyfer has found happiness once more after his string of previous failed relationships.

The 24-year-old actor has previously been linked to several Hollywood stars, including Glee‘s Dianna Agron and Emma Roberts, and there also was a little flirting with Julianne Hough. However, the Endless Love star had a serious relationship with Elvis Presley’s granddaughter Riley Keough. The former couple were so smitten that they were even engaged early in 2012, but their engagement didn’t last long, and the couple went their separate ways before the year’s end.

However, that’s all over, and Pettyfer has moved on to better days. He and his new lady apparently met through friends, and they appear to be having a lot of fun together. The two celebrated the British actor’s birthday on Sunday, April 6, at Disneyland in Anaheim, California.

Teresa Palmer dishes I Am Number Four on DVD >>

Horst — who has just been named the new face of Maybelline — was clearly thrilled with the outing and shared a picture on Instagram of herself and her new boyfriend, who she referred to as “baby.”