Rihanna and Rita Ora are compared more than Clorox and Lysol, and the irony is one seems to need a wipe, whereas the other glistens squeaky clean. Guess who’s who in this music video. 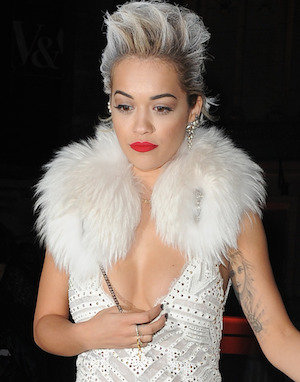 We are NOT arguing talent today.

We are discussing, seriously, where Rihanna and Rita Ora are different and how it shines through in Rita Ora’s latest music video, “Never Let You Down.”

Remember when we took a poll to see who you preferred? >>

Produced by Ora’s boo, Calvin Harris, this video is to Ora what Mandy Moore’s “Candy” was back in the ’90s. It’s sprinkled with happiness, charm is drizzled in every crease and her smile is the cherry on top that would make even dentists swoon.

But why even mention Rihanna? Because it’s just so hard NOT to mention her when you drop Ora’s name. They look so much alike, yet Rita Ora has an aura that is the polar opposite of Rihanna. One relevant example is how Ora can show the same uncomfortable amount of under-boob in a video (this one in particular), but you don’t feel it’s as raunchy as Rihanna.

Don’t see what I mean?

You know how some girls can wear booty shorts and it’s chic and summer-y, whereas others make it look like boyshort underwear? Sure, you can blame anatomy for making the difference, and I’m saying the anatomy of these two artists is different.

Ora carries herself in a confident but unassuming way, whereas Rihanna charges into a room and revs up the libidos of even the comatose. But they’re both ferociously hot.

The video may have made me think of Rihanna because it also has the whimsical innocence she had when she first broke out in music. Before Chris Brown (or before the industry got to her, whatever it is) she was a beacon of sunshine and free-spiritedness. Ora has that, and we all hope she doesn’t lose it.

Her outfits are edgy, her summer-y spirit swims right into her breezy pop track and she’s obviously as happy as ever. In one behind-the-scenes video she revealed, “I think this is the perfect song to launch my new album because I wanted to be as personal as possible and honest as possible and I’m happy right now, I’m in a really good place.”

It’s confirmed, everything about Ora and this upcoming album is appearing as cheery and promising as a bright Sunday morning. Go off and pick some flowers, sink into your comfy chair and press play.