There’s a common thread between some of the funniest people in comedy today: They all were performers with the Upright Citizens Brigade. Here are five of our favorites. 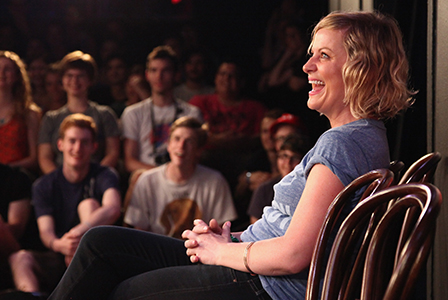 A former French teacher, Parham cut her comedy chops in the Upright Citizens Brigade before nabbing a supporting role in the TV series Accidentally on Purpose. She and fellow UCB player Jessica St. Clair starred in the NBC series Best Friends Forever before creating their new USA show Playing House, in which they play — you guessed it — best friends forever.

A regular on VH1’s Best Week Ever, St. Clair is a member of UCB’s New York and Los Angeles casts in between various TV and movie roles in projects like It’s Complicated, Bridesmaids, Life As We Know It, The Dictator and Best Friends Forever. She co-created her latest project, the USA series Playing House, with BFF Lennon Parham.

Chilean-born Sanz honed his comedy skills in theaters around Chicago, including the legendary Second City, before becoming a founding member of the Upright Citizens Brigade. After joining the cast of Saturday Night Live in 1998, he sat in for Tina Fey with fellow UCB alum Amy Poehler at the Weekend Update anchor desk and did wicked Gene Shalit impressions in the Jimmy Fallon days.

Arguably the most famous of the bunch, Golden Globe winner Poehler helped found the New York-based UCB group and quickly scored a TV gig. The very funny lady joined the cast of Saturday Night Live in 2001 and was promoted to co-anchor of Weekend Update alongside Baby Mama co-star Tina Fey in 2004. After leaving SNL, Poehler went on to star in her own hit series, the Emmy-nominated Parks and Recreation, with fellow UCB alum Aziz Ansari. Watch the pair discuss their characters.

Along with Poehler, Ansari is one of the most recognizable alums of UCB. This NYU grad was the first cast hire for Parks and Recreation, and he also landed key roles in Flight of the Conchords, Scrubs, Get Him to the Greek, 30 Minutes or Less and I Love You, Man. Ansari is still active on the standup circuit and his material, including the book he’s currently writing, focuses on his personal experiences — like this bit about an R. Kelly concert.