Hillary Clinton is showing she’s got grace under fire by making the best of a shoe being thrown at her. Watch her as she cracks a joke after ducking just in time. 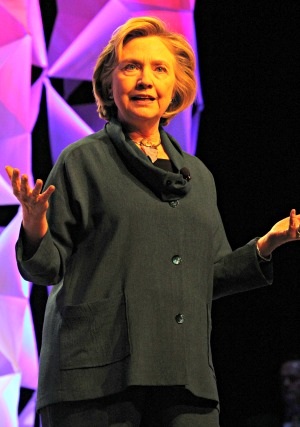 Hillary Clinton not only has stellar reflexes, she’s quick with the wit. Thursday, moments after she took the stage to speak at the Institute Of Scrap Recycling Industries Convention, she was targeted by a shoe-throwing hater.

Narrowly ducking the object thrust in her direction, the 66-year-old former White House resident made the best of an unsettling situation.

Pharrell endorses Hillary Clinton, but will she actually run? >>

“What was that, a bat?” the proud female leader initially asked the crowd, unable to identify what had flown past her. She then asked, “Is that somebody throwing something at me?”

As the shoe-tossing woman was escorted by officials out of the room, Clinton took advantage of the convention’s Las Vegas location, cracking, “Is that part of Cirque du Soleil?”

After resuming her speech, she went on to joke, “My goodness, I didn’t know that solid waste management was so controversial. Thank goodness she didn’t play softball like I did.”

Jimmy Kimmel gets some selfie action with the Clinton family >>

Not so funny is what’s in store for the woman who threw the shoe at the Twitter-happy Clinton.

A U.S. Secret Service supervisory special agent told reporters the woman, who has not yet been publicly identified, was questioned and would face criminal charges. A black and orange shoe was recovered from the stage, as well as some papers. The woman admitted to throwing the items, but did not offer any explanation as to why.

Admitting security could have been tighter, the agent said the woman wasn’t a credentialed convention member and wasn’t supposed to have been allowed in to see Clinton’s speech.