The official announcement for David Letterman’s replacement happened on Thursday and the choice is Stephen Colbert. It’s a safe choice for CBS. 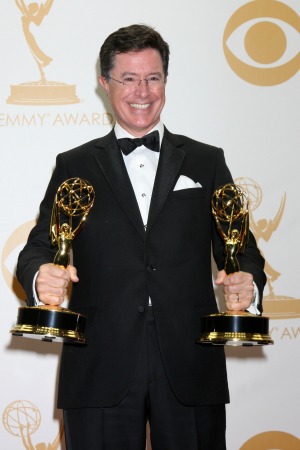 Is it just us or was today’s announcement that Stephen Colbert was taking over for David Letterman an uninspired choice? It’s not that the Comedy Central host isn’t talented, but we were looking for someone more exciting.

After all of the rumors, it was announced on Thursday that The Colbert Report host was going to take over for the retiring Letterman in 2015. While CBS president and CEO, Les Moonves, praised the choice because it “speaks to our commitment of upholding what he [Letterman] established for CBS in late night,” the pick is pretty safe for the network.

It keeps the late-night talk show scene exactly the same with a heavy male host presence. Outside of Arsenio Hall, all of the men are also Caucasian. CBS couldn’t find one woman in the bunch? Names like Ellen DeGeneres and Chelsea Handler were floated around, but it looks like Colbert came out to be the big winner.

While the comedian is known for his satirical character on The Colbert Report, he has promised he will just be himself on the show. It just doesn’t seem like it adds any excitement to the late-night scenery. Immediately following Late Night is Craig Ferguson’s show, which features his edgy sense of humor, so CBS’ lineup will definitely be for a specific audience.

With NBC and ABC featuring the amiable Jimmy Fallon and Jimmy Kimmel, respectively, perhaps a more charming personality like Neil Patrick Harris would have been the perfect fit for the 11:30 p.m. time slot? With CBS’ official choice, it will definitely be status quo for the late-night viewer.

What do you think of Stephen Colbert replacing David Letterman?