Juan Pablo finally used the word “love” about his girlfriend and The Bachelor winner Nikki Ferrell. 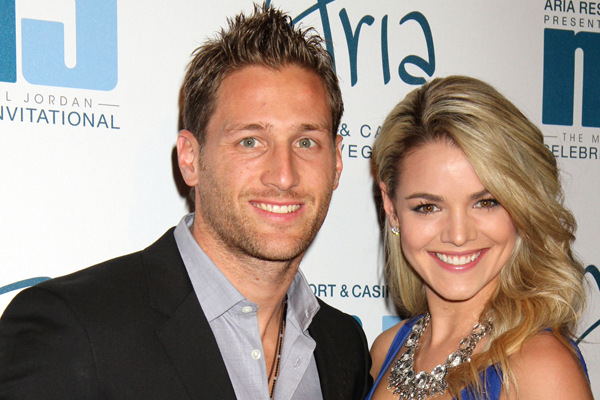 Former Bachelor Juan Pablo is slowly getting closer to saying “I love you” in public to girlfriend and show-winner Nikki Ferrell after using the word “love” about his sweetie on Instagram.

Posting a cute photo of Ferrell at work, Galavis captioned the image of his non-fiancée with, “Mi Catira @nikki_ferrell LOVES her JOB and thats ONE of the things I LOVE about her… #NikkiTheNurse.”

In the photo, Ferrell stands with her back to the camera at the Children’s Mercy Hospital and Clinics wearing her blond hair in a cute bun. The pretty nurse is wearing a T-shirt that reads, “PEDIATRICS… our patients are cuter than your patients.”

Just a few days ago, Us Weekly reported that Galavis had actually finally said “I love you” to Ferrell after having refused to do so on several recent occasions. According to a source, the Venezuelan hunk finally uttered the three magic words to his sweetheart. “They Skype and text every day and are in constant contact,” the source added.

As fans of the show know, Galavis famously refused to tell Ferrell he loved her while on The Bachelor‘s After the Final Rose special last month. Host Chris Harrison pressed the 32-year-old father of one to share his feelings for his chosen winner, but he said he didn’t think it necessary to profess his love for all to hear.

Since then, Galavis has posted a slew of photos of himself and Ferrell on his social accounts, depicting the couple in various venues such as at a wedding and on a night out in Las Vegas. Galavis also shared a telling photo of the couple standing in front of the MGM Grand’s Wedding Chapel.