The mother of Reeva Steenkamp says she is obsessed with watching Oscar Pistorius’ every move in court during his murder trial. 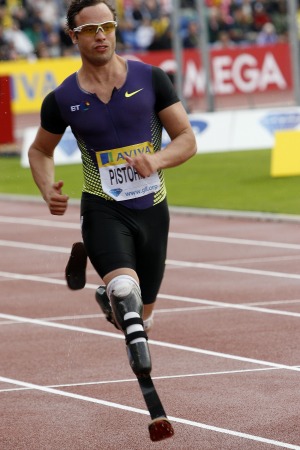 June Steenkamp is living every parent’s worst nightmare: Not only was her daughter, model Reeva Steenkamp, killed in a horrific manner, but she has to face the accused killer in the media every day.

But this mother refuses to hide from the pain. Instead, June Steenkamp been in the courtroom every day of the trial, and says she cannot look away from the man who admittedly took her daughter away from her.

In an interview with The Mirror, Steenkamp says she is “obsessed” with watching the former Olympian, despite having to see horrifically graphic crime scene photos of Reeva’s dead body.

“It’s very traumatic when certain things come up. This is my child and I must listen to the graphic detail,” the grieving mother explained. “I look at Oscar the whole time, to see how he is coping, how he is behaving. I’m obsessed with looking at him. It’s just instinctive. I can’t explain it.

“I keep thinking, ‘Let me see how he’s taking this.’ He has been very dramatic — the vomiting and crying. I think he’s just about keeping himself together. I don’t know whether he’s acting. Most of the time he’s on his cell phone or looking down at papers or writing notes.” She added that Pistorius’ courtroom apology to the Steenkamp family left her “unmoved.”

“It won’t bring my daughter back,” she said. “We just want to know the truth.

“My presence unnerves him, I’m sure of it — he’s answerable to me,” she added. “He did eventually look at me: He looked at me and said, ‘Good morning, Mrs Steenkamp.’ I never answered, I just nodded my head.

“I don’t know the man. All I know is what he’s done. He must see me there in the court, he must feel my eyes boring into him. I think it makes a lot of difference. I do look at him too much, maybe. I like to see how he is reacting.”

Steenkamp admitted that seeing the graphic crime scene photos and testimony was nearly too much to bear — but she keeps going because her daughter needs her.

“It was just horrendous. I will see that picture for the rest of my life, until the day I die, I promise you… I’m being strong for Reeva. I have to be there. It’s hard for me to do it, but I’m representing my child.

Pistorius is accused of premeditated murder in the shooting death of the beautiful blonde in the early morning hours of Valentine’s Day 2013. He maintains he mistook Reeva for a burglar.