Prince William and Catherine, Duchess of Cambridge honored veterans and the queen during a busy day on their tour of New Zealand. 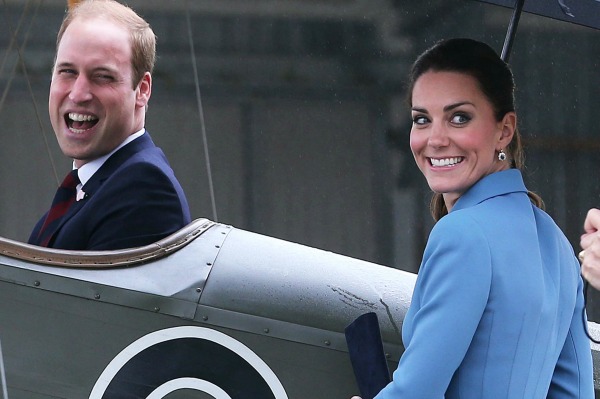 Prince George was otherwise occupied, but his famous parents Prince William and the former Kate Middleton had a busy day in New Zealand for their third day of tour appearances.

Switching gears from the previous day’s adorable royal playdate, Will & Kate began the day with a visit to the War Memorial and Clock Tower in Seymour Square in the town of Blehnheim, where they met an enthusiastic crowd, including war veterans.

Kate donned a sky blue belted Alexander McQueen coat for the occasion, featuring pleating in the back, which she accessorized with navy blue suede pumps and sapphire-and-diamond earrings that once belonged to Princess Diana (Kate has had them reset in a drop style).

William wore his service medals earned during his time in the Royal Air Force.

The couple placed a wreath at the site along with special notes written by each to mark the 100th anniversary of the year of the end of World War I.

Watch Will & Kate at the wreath-laying

Later in the evening, the couple attended a state reception held in their honor at which a new portrait of Prince William’s grandmother Queen Elizabeth was unveiled. The artist, New Zealander Nick Cuthell, undertook the project commissioned by the New Zealand Portrait Gallery to commemorate the Diamond Jubilee.

In the new portrait, the monarch wears the same fern brooch Kate sported on her red coat seen upon the family’s arrival to the country just days prior. 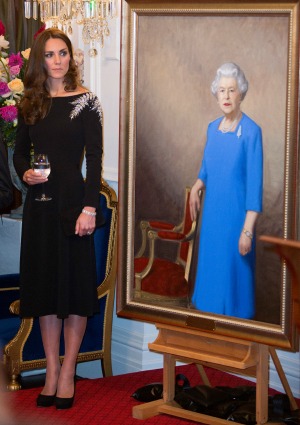 For this, one of the glitziest events of the tour, Kate wore black boat neck Jenny Packham cocktail dress featuring a sparkly fern design on one shoulder, accessorized with a diamond bracelet and earrings. Unfortunately it was not deemed a tiara-worthy occasion.

Prince William later gave a speech to the gathered dignitaries.

“Rau rangatira m? o Aotearoa, tena koutou katoa [Distinguished people of New Zealand, greetings to you all],” he said, starting off in the local language.

“Thank you also for hosting Catherine, George and me during our time in New Zealand. I hope that George doesn’t keep you up! He’s at his most vocal at 3 a.m., as you may have noticed — I swear I heard him doing the haka this morning. He’s a bonny lad and you’ll be pleased to know that he’s currently preparing for life as a prop forward.

“I cannot tell you how happy I am to be back here in God’s Own Country — as I have learned to call it — and this time with my wife and son. When I returned to New Zealand for the first time as an adult in 2005, I came mainly to watch the All Blacks against the British and Irish Lions, the best way to be introduced to this sports-passionate nation.

“Her Majesty is portrayed wearing her silver fern brooch, which provides a simple but clear reminder of Her Majesty’s deep affection for the people of New Zealand. Kia ora t?tou katoa [Greetings to us all].”