Stephen Colbert will be replacing David Letterman, taking over the legendary host’s spot on The Late Show. 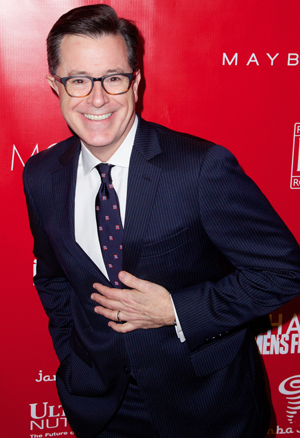 The Late Show has a new host. Taking over David Letterman’s legendary post, Stephen Colbert has been announced as his successor.

The Colbert Report star will be leaving his own show to replace the retiring David Letterman on the popular late-night venue, CBS announced on Thursday. In a statement to the press, Colbert said that “simply being a guest” on Letterman’s show was already a highlight of his career.

“I never dreamed that I would follow in his footsteps, though everyone in late night follows Dave’s lead,” Colbert said. “I’m thrilled and grateful that CBS chose me. Now, if you’ll excuse me, I have to go grind a gap in my front teeth.”

CBS president and CEO Les Moonves also released a statement about the replacement announcement, praising Colbert for being one of the most unique television personalities.

“David Letterman’s legacy and accomplishments are an incredible source of pride for all of us here,” Moonves said. “And today’s announcement speaks to our commitment of upholding what he established for CBS in late night.”

Having hosted his show since 2005, Colbert is a nighttime staple for his satirical conservative-persona humor and hilariously brutal daily news critiques. Chairman of CBS Entertainment Nina Tassler called Colbert a respected host whose talents lend a “train of thought-provoking conversation, humor and innovation [to] everything he touches.”

Tassler went on to say that with Colbert’s varied interests and ability to entertain with a broad spectrum of subjects, he will be a great fit for CBS’ late-night viewers. The comedic host has signed a five-year contract with CBS, which will begin once Letterman exits the Late Show in 2015.