Demi Lovato caused a frenzy among her Lovatics on Twitter when she ditched her colorful hair in favor of her natural long brunette locks. 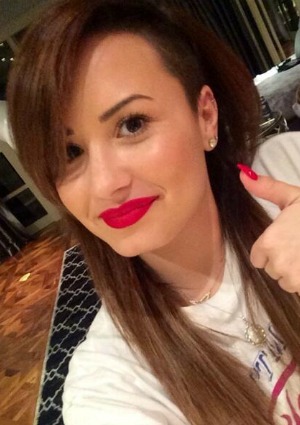 After trying out several shades of the rainbow and even a short ‘do, Demi Lovato went back to basics. On Wednesday night, April 9, the pop star took to Twitter to share a new (but throwback) hairstyle: long brunette locks.

Throughout the last few years, the pop superstar has sported everything from blond to neon blue and even shaved half of her head. In the message, which was clearly well received by her legion of Lovatics with over 40,000 retweets and over 55,000 favorites, the singer actually made a pun quoting the lyrics to her hit single “Give Your Heart A Break.“

Shortly before the big unveil, the hit maker was all about the teasing game, asking her 21.7 million followers what they think she should do her hair. Who knew a girl’s hair could cause such a commotion?

Demi Lovato: What are these celebs doing to their heads? >>

Judging from fan reaction, Lovato’s change-up is a clear win.

Lovato is making headlines for more positive reasons than earlier this week when alleged nude photos of the singer surfaced on the internet. But they weren’t just any nude shots; some of the photos included her in bed with boyfriend Wilmer Valderrama.

While the singer hasn’t responded directly to the controversy, she did take to Twitter shortly after the headlines to post a rather cryptic message in Spanish along with an old photo of her donning some pink hair. That rainbow reference was no joke.

For those folks that don’t speak Spanish, the former X Factor judge wrote, “I am strong. I’m a fighter. Don’t underestimate me.”

Lovato has more important things to focus on anyway. Since wrapping up the North American leg of her Neon Lights tour, the pop star is currently taking a break before heading to Brazil to continue the trek, which wraps up June 1 in London.