Lindsay Lohan got emotional when Oprah spoke about the star’s progress during Lohan’s Late Show With David Letterman appearance. 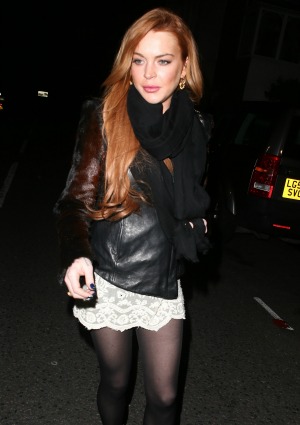 Lindsay Lohan’s road to recovery has been a bumpy one — even with Oprah Winfrey by her side. While viewers watch the life of LiLo take its course weekly on OWN’s Lindsay, the media sensation stopped by the Late Show With David Letterman on Wednesday to give some insight on the show.

During her appearance, Lohan suggested they give Winfrey a ring, but Letterman wasn’t really on board. However, all it took was a little bit of cheering from his studio audience and Letterman dialed up Winfrey.

When David asked what she thought of Lindsay’s progress, Winfrey hesitated before sharing her thoughts. “I think she’s doing really OK,” she told the host, who recently announced his retirement. “To have cameras following you around for every phase of your life, and you are trying to pull your life together, I think that’s a really difficult thing. So, yeah, we’re really pleased she’s making some progress.”

Lohan became overwhelmed by Winfrey’s kind words and began to shed a few tears. Always the funnyman, Letterman made light of the moment, joking, “Oprah, I’ve spent 30 years trying to pull my life together. Where have you been?”

Viewers saw firsthand Lohan’s struggle on the most recent episode of Lindsay when she admitted she broke her sobriety for a glass of wine. In the end, the actress acknowledged her mistake, saying, “I screwed up, and that’s OK, but now what can I do so that it doesn’t happen again? That’s part of the process.”

Ratings for Lindsay dropped a significant amount during this past Sunday, but to be fair, the viewership for the show has reportedly been stabilizing since its premiere.

Watch Lindsay Lohan talk to Oprah Winfrey on the phone.

31 mins ago
by Grace Kang

50 mins ago
by Grace Kang