Once upon a time, TV shows used to revolve around the male characters (hello, Leave It to Beaver). But today we’re tuned into some seriously fierce female role models. Try to keep up, boys. 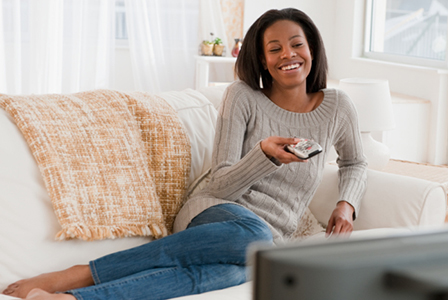 They are giving us what we want to see

Film critic and self-admitted lifelong TV junkie Brian Flieder, who is a member of the Broadcast Film Critics Association and a voter for the Critics Choice Movie Awards, says that there is “no question that not only are women more present on TV today than in the past, but they are stronger, smarter and funnier than ever before.”

He adds, “And it’s about time. Women, rightly so, want to see women who are just as strong, just as smart and just as funny as men on screen. They want to be able to relate to, and also admire, positive role models. And as more women are writing for TV and becoming filmmakers than ever before, we can only expect this trend to continue.”

Film and television producer and former entertainment attorney James Elam adds that women on the small screen today “are able to address issues that have stifled women’s progress in the past and bring those issues to the forefront.”

The Carol Brady days are over. In general, television is so much more exemplary of today’s real world than in years past. Whether in a funny or dramatic way, female characters on television today are sometimes seriously flawed. And that’s okay. That’s what gives them depth, makes them unique and offers a connection that makes them relatable to the viewers — which makes them so much more interesting to watch. Flieder adds, “On Homeland, Claire Danes is a great representation of a strong and smart, yet deeply flawed woman capable of handling the responsibilities of Homeland security, despite secretly battling mental illness.”

… But we still look up to them

Despite the fact that today’s female television characters are far from perfect, they still possess characteristics that make them fundamentally good and strong, which makes female viewers not only able to empathize with them but also to look up to them. Take Maggie from Playing House, for example. She discovered her husband was cheating on her while she had a bun in the oven, but instead of simply accepting the situation, especially because she’s pregnant, she bravely kicks him out and begs her best friend Emma, who has up until now been running her own successful business in China, to return to their hometown to live with her and help her raise the baby. And if television has taught us anything, it’s that if a woman is powerful, her magnitude is immeasurable when she’s got good girlfriends by her side.

They can get nasty… in a brilliant kind of way

If you’ve ever watched the Women of SNL, you’ll know that even the male cast members admit that the girls are dirtier than the boys when it comes to creating funny, outlandish and totally edgy skits that push the envelope. Ahem, anyone recall the “Colonel Angus” skit with Christopher Walken, written by none other than Tina Fey? Female comedians are now a force to be reckoned with — and we think it’s because their wit is backed by brains.

Flieder adds, “Tina Fey as well as Amy Poehler have certainly made their marks, not only as bankable sitcom stars, but as quite possibly the best award-show hosts in history, [and] Lena Dunham has taken the baton from the once-edgy Sex and the City and pushed the boundaries even further, becoming the voice of her generation with her show Girls.”

They play powerful roles but they have heart

From fantasy dramas like Game of Thrones to “real-life” comedies like The Middle, women are no longer content to ride in the passenger seat of life. They take control of their own lives, whether that means following in their father’s footsteps to rule the Seven Kingdoms like Daenerys Targaryen or if it simply means finally standing up to the neighborhood Mom bully, like Frankie Heck does to trashy Rita Glossner after trying to win her over by buying her groceries. However different these roles may be, both of these female characters, like so many others on television today, are tough and ballsy, but they also have heart and compassion.