Do you do one cover or do you do five? Marie Claire decided there are five fresh faces in Hollywood to take a look at in their May issue. 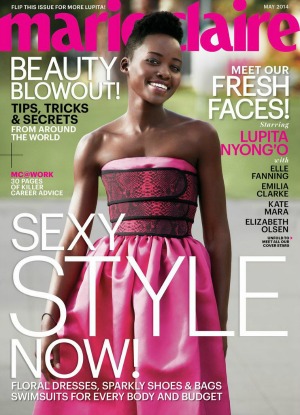 So many gorgeous actresses — how do you choose? Marie Claire decided not to choose just one, so they are publishing five covers for their May issue, entitled Hollywood’s “Fresh Faces.”

The stunning young actresses who are included on this list are Lupita Nyong’o, Kate Mara, Emilia Clarke, Elizabeth Olsen and Elle Fanning. They are all having a fantastic year in the entertainment industry and the magazine gets their perspective on what life is like for them.

No one has taken the fashion and film world by storm like Nyong’o. As this year’s Best Actress in a Supporting Role winner at the Oscars, for 12 Years a Slave, her life changed in an instant.

She shared, “It was phenomenal. As brilliant as it was, onward ho. I hope that I will get to work soon. In due time, what I should do next and what I want to do next will reveal themselves. I am not in the business of trying to top this year — that’s virtually impossible. I’d have to be pronounced the queen of England or something.”

Olsen has grown up watching her sisters, Mary-Kate and Ashley, endure years of childhood fame and fortune. After seeing what they went through, she knows how she wants to live her life. 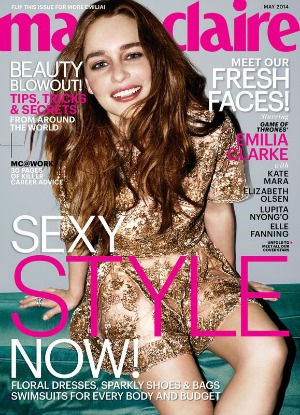 Game of Thrones fans might be surprised at how ambitious Emilia Clarke’s future goals are. She wants a big career and a big family.

She explained, “Personally, I’d like as many children as I can pop out, I reckon. You come from a happy family; you want to create a happy family. And in the same breath, I’d like to be on stage at England’s National Theatre, doing Miller and Chekhov. Give me a Sam Mendes/Tennessee Williams combination — that would be glorious. And to be making some Oscar-worthy movies with Scorsese. I’m always looking for the hard road. That way, you remain interested and interesting. Hopefully.”

Mara may be one of the most enigmatic women featured on Marie Claire‘s list. She really doesn’t want to draw attention to herself, even though she chose acting as a profession. She even got rid of her signature red hair.

“I felt relieved getting rid of red — people in my family were saying, ‘Red hair is your identity — you’ll ruin it!’ But I’m an actor. I’d shave my head if the part called for it. I love morphing into someone different; it makes you wear makeup differently,” said the star.

The youngest gal on the list is 16-year-old Fanning, who seems wise beyond her years, even though she is still in high school. She has a very practical approach to fashion.

That’s wise advice from a teenager.