Zach Braff’s Wish I Was Here follows his 2004 directorial debut and it looks like a tearjerker. 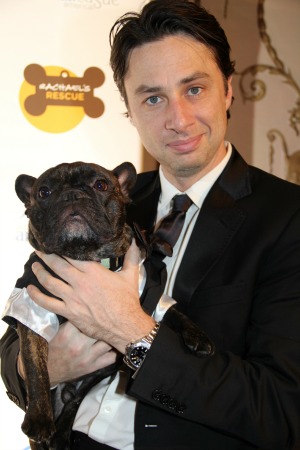 The first trailer for the highly-anticipated Wish I Was Here has finally been released. Judging by the preview, the film will be visually stunning and have a kick-butt soundtrack.

Zach Braff and Donald Faison are psyched for repeal of DADT >>

The film is Zach Braff’s follow-up to his 2004 directorial debut, Garden State, and from the looks of the trailer, it should be an emotional roller coaster ride. Braff leads an epic cast, which includes Kate Hudson, Josh Gad, Jim Parsons, Ashley Greene, Mandy Patinkin, Donald Faison and Joey King. The movie was also the last piece of work to come from James Avery, who died in January at the age of 68 after having open heart surgery.

According to the film’s official Kickstarter page, Wish I Was Here tells the story of 35-year-old Aidan Bloom (Braff), who is a struggling actor still trying to find his place in the world. When Aidan’s dying father can’t afford to pay for his kids’ private schooling anymore, he decides to take matters into his own hands and attempts to homeschool the 5 and 12-year-old children. And that’s when things get interesting.

“The result is some funny chaos, until Aidan decides to scrap the traditional academic curriculum and come up with his own,” says Braff. “Through teaching them about life his way, Aidan gradually discovers some of the parts of himself he couldn’t find.”

Speaking of Kickstarter, Braff raised an amazing $3.1 million on the fan-sourced fundraising site in what he says was an attempt to keep artistic integrity. “There are money guys willing to finance the project. But in order to protect their investment, they’re insisting on having final cut,” said Braff. “Also, they want to control how the film is cast.”

Although the film seems like it will be covering some pretty heavy subject matter, like death and the meaning of one’s own life, it’s probably safe to say that we can look to Braff’s real-life pals, Faison and Parsons, for some comic relief.

“I have always LOVED Jim Parsons. But now I can Big Bang him,” Braff said of the man otherwise known as Sheldon Cooper when Parsons quietly announced he was gay in 2012. The two had worked together on the set of Garden State. Braff and Faison are also very well known for their massive bromance, which has been brewing ever since they co-starred on Scrubs.

Wish I Was Here premiered at Sundance in January and hits theaters this July.