Stacy Keibler and Jared Pobre are going to need a pink nursery after announcing they will be parents to a new baby girl. 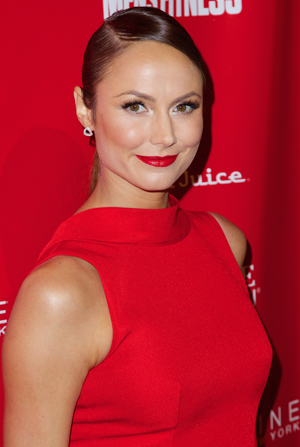 Not long after the pair tied the knot, Stacy Keibler and Jared Pobre announced they were also going to be parents. Now the newlyweds have learned that they are having a girl together.

Looks like the happy couple will be decorating their new nursery in pink after reports confirm that Keibler and Pobre have a baby girl on the way, People magazine reported.

“They were excited for this blessing and just wanted a healthy baby,” a friend of the lovebirds told the magazine. “They will make amazing parents as they are so in sync.”

Keibler and Pobre got married early last month in an unexpected wedding ceremony during a vacation in Mexico with both their families. Another pal of the couple told Us Weekly that they were super-happy about the way their secret nuptials were celebrated.

“They’ve been head over heels with each other since they met,” the source added.

Just two weeks after getting married, the happy couple announced they were expecting a baby together, and while they didn’t think they’d be married or have kids so soon, they wouldn’t have it any other way.

Stacy Keibler vanishes from Twitter after split from George Clooney >>

“When you meet the right person, everything changes,” Keibler told People. “I’m so excited for the new chapter in my life. I’m so ready for it. I feel for the first time like I’m really fulfilled and at peace.”

Just as fans were reeling about their surprise wedding, the creative pair announced their baby news by posting an Instagram photo of a literal bread bun cooking in the oven. “Look what we’ve got cooking,” the photo caption said.