Seth Rogen is set to host SNL for the first time in five years, but in the latest promos for the show, it’s actually Aidy Bryant who ends up stealing the show. 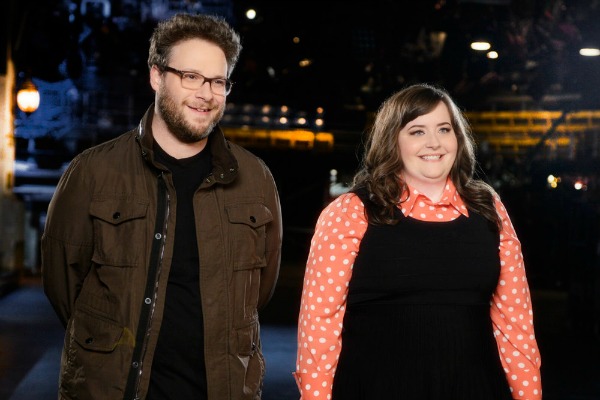 This weekend will mark Seth Rogen’s return to Saturday Night Live when he hosts the show on Saturday, April 12, with musical guest Ed Sheeran.

Rogen isn’t new to comedy, nor will this be his first time hosting SNL. But if the latest promos for the show are any indication, it’s actually cast member Aidy Bryant who might just end up stealing the show. She certainly stole the promos.

In an extra-long video, the two run through various versions of announcing Rogen’s hosting job. Below are just a few highlights from the video.

Poor guy — all Rogen wants to do is announce that he’s hosting SNL this weekend but he can’t get through the line without being told repeatedly by Bryant all the ways he’s doing it wrong.

Bryant turns into a gushing fangirl and asks if they can do some improv together. They decide to drop the cue cards and hilarity ensues, but not necessarily for the reason you might think.

After that, Bryant encourages Rogen to just be himself and relax while doing the promo, but it turns out she’s the one that isn’t all that experienced. Rogen gives her one piece of advice, but she immediately blows it.

Bryant then wants to find out more about Rogen’s new movie with Zac Efron, or to be more precise, she really just wants Rogen to describe Efron’s sexy body in detail. Who can blame her, right?

Bryant asks Rogen what he’s been doing since the last time he hosted the show, but then starts giving him a hard time for bragging.

The two jump in the air and scream “SNL!” so that the image can be frozen in midair. The results are just as awesome as they hoped.

Bryant starts out helping Rogen with his introduction, but quickly takes over and launches into her own song and dance.

Check out the video to see all of Rogen and Bryant’s SNL promos.