Jimmy Fallon and Anne Hathaway paired up to sing some awesome Broadway-styled rap hits on The Tonight Show. 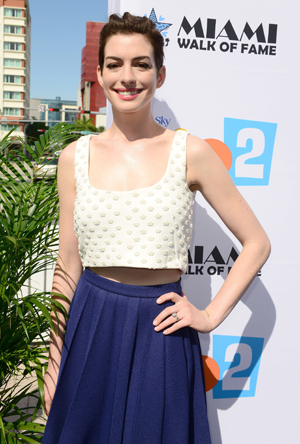 During her stop on The Tonight Show, Anne Hathaway and host Jimmy Fallon paired up with a piano to belt out some Broadway-inspired famous rap hits.

Going full out, Hathaway and Fallon performed a hilarious duet where they sang some of the latest rap hits with a big twist. The singing duo gave the Broadway touch to songs like “Gin and Juice,” “In Da Club” and “B**** Don’t Kill My Vibe.”

Anne Hathaway gave people a break from herself >>

With Fallon on the piano and Hathaway standing next to him in a sexy black outfit, the pair sang in true Broadway fashion, taking full advantage of the Les Misérables star’s incredible voice.

“What do you say we break ’em off a little somethin’ West Coast style?” Fallon said, and then erupted out into a hopping, piano-led, “Gin and Juice” from Snoop Dogg. Hathaway didn’t miss a beat as she sang along. “But I, somehow, some way, keep comin’ up with funky a** s*** like every day.”

Did Anne Hathaway have an Oscar-sized meltdown? >>

The two went on to the next hit — Fallon opening with, “Hey, Anne, how ’bout we do this next one like we’re ‘In Da Club’?”

After the entertaining take on 50 Cent’s famous single, Fallon and Hathaway ended the medley with an awesome rendition of Kendrick Lamar’s “B**** Don’t Kill My Vibe.” Hathaway killed it with her awesome voice before she hopped on the piano for the grand finale.

During Hathaway’s Tonight Show visit, the tall and slim actress also spoke about her latest paparazzi incident, where photographers made it look like she was drowning on a Hawaiian beach.

Hathaway detailed how she went for a swim, and noticed she was caught in a riptide and “was just kind of stuck at about like 400, 500 yards out.” So, after swimming in place for what seemed like a long time, her husband began to get concerned and called out to her as she tried to swim to shore.

Of course, that’s when photographers began snapping away and published a photo of Hathaway where she looked like she was struggling to stay afloat.

Watch both videos of Anne Hathaway’s Tonight Show visit below.