Rachel Weisz and her husband Daniel Craig are seldom spotted in public together, but the pair have made an exception in the name of charity. 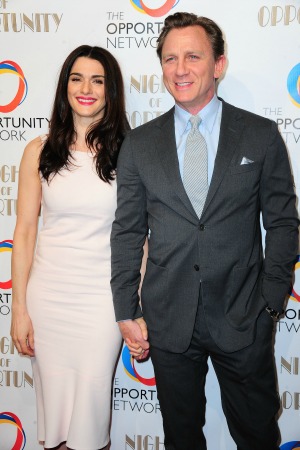 Rachel Weisz and Daniel Craig may rarely be seen together in public, but when they are it’s to celebrate their achievements with their charity work.

The couple were most recently spotted at the Night of Opportunity gala at Cipriani Wall Street in New York on Monday. And the event honored the pair for their charity work with The Opportunity Network (OppNet), an organization that helps to provide education to underprivileged teens.

The Oscar-winning actress was only too thrilled to have the opportunity to work on such a wonderful cause alongside her husband, and she revealed to People that her decision to work with the charity was an easy one.

“It’s really lovely. It’s something that was incredibly natural and obvious to us,” she confessed.

“I’ve met several of these kids and they’ve told me their stories to my face, and it was very hard not to cry,” Weisz added. “Not because it was sad, but because they’re so inspiring, and so courageous.”

Weisz is a mother to her son Henry, 7, whom she shares with her former partner Darren Aronofsky, and she hopes to inspire her son with her charity work.

“Kids watch their parents closely. They watch everything they do — the good things and the bad things,” she said. “So hopefully they grow up in a culture of caring about others, and it will be up to them to decide what they want to do, but hopefully it will rub off on them.”

The couple appeared to be in good spirits throughout the event and were openly affectionate with each other. Craig’s wife was not the only person who felt inspired during the night. The Skyfall actor also feels excited about being a part of the organization.

“It’s not just the grand gesture that counts [when giving back] — it’s the everyday that matters,” Craig told People.

OppNet’s founder Jessica Pliska also took to the stage to praise the couple for their work, saying, “People who know them all say the same thing and know this to be true — they’re incredibly authentic, they really care about this, and this night really meant a lot to them.”

“You can’t always say that about everyone … especially two superstars,” Pliska added. “We hit the jackpot.”