Prince George won over his future royal subjects with his adorable antics at a New Zealand playdate. 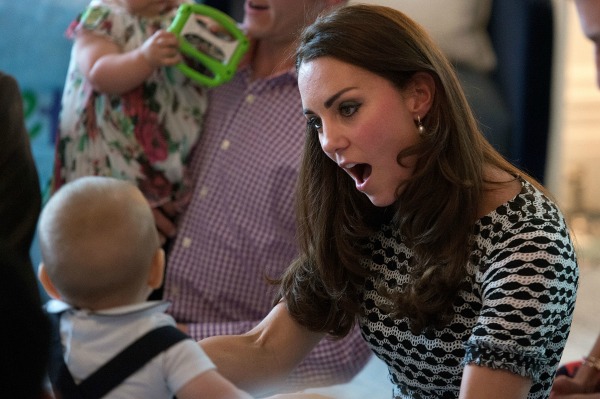 It was baby mayhem at the Government House in Wellington, New Zealand, today as Prince George and his very famous parents attended a playdate with 10 other families. 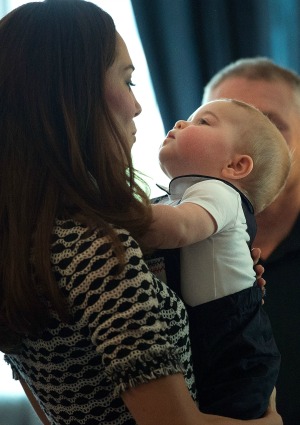 Organized by The Royal New Zealand Plunket Society, the gathering was designed to give the public a better look at the future king in a less formal setting than his father, Prince William, was given during a tour down under at nearly the same age.

George enjoyed crawling around with the other babies, playing with toys while wearing his adorable navy blue Rachel Riley overalls with sailboat smocking on the front and a crisp white blouse.

He also seemed to enjoy tugging on his mother Kate’s luscious locks, but the Duchess of Cambridge didn’t seem to mind at all. Dressed in a black and white Tory Burch Paulina open-knit dress, she occasionally wiped dribble from the teething tot’s chin and pulled him to his feet so he could bounce up and down.

The babies participating in the meet-and-greet were chosen by Plunket, a health care and support organization, to represent the diversity of their community.

“The parents are a spread of all the communities in New Zealand, including Maoris, Samoans, people of Chinese descent and gay couples. This is a very multicultural country and we wanted the Duke and Duchess to meet people from all backgrounds,” explained New Zealand Plunket president Tristine Clark. 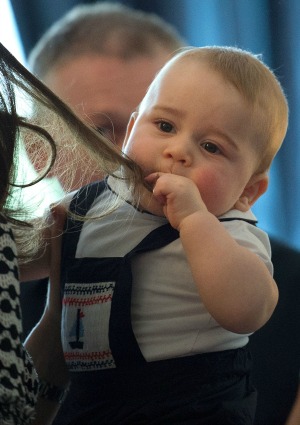 The parents in attendance were delighted to meet the future kings and queen. Ryan Tunstall, father of baby Lucas, told the gathered press, “We found out Lucas had more teeth than George so he’s winning that race! George has got about four or five teeth coming through. Lucas has got his seventh coming on.”

“We chatted to the Duke first and asked about how they and George coped with the jet lag. William said sleeping and distracting was the best thing, and that’s what they’d done with George.”

“We spoke to the Duchess about group play — George had never played with so many babies before. She said it was the most amount of babies they’d ever had in a room with George,” Tunstall revealed.

All the children present were born within a couple of months of the little prince.

Will and Kate have a busy day tomorrow with four appearances planned: a wreath-laying and commemoration at the Blenheim War Memorial, a WWI aircraft exhibition at the Omaka Aviation Heritage Center, a meeting with the Prime Minister and Leader of the Opposition and a state reception in the evening, including a speech to be given by Prince William and the unveiling of a new portrait of Queen Elizabeth II.