The phrase “present dystopian” may sound like an oxymoron, but Ann Brashares manages to capture the idea perfectly in her new book The Here and Now. 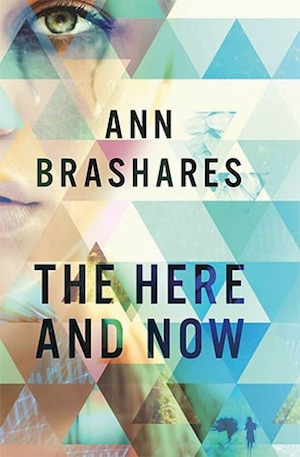 If you love Divergent but are also a fan of Meg Cabot and previous Brashares novels like The Sisterhood of the Traveling Pants, then The Here and Now is a book you should pick up right here, right now.

First of all, before we delve between the pages, let’s talk about this cover. There’s something so simplistically complex (it’s just full of oxymorons, apparently) about it, which speaks to the plot of the book as well. When I received the ARC in the mail, I initially glanced at the cover, saw a bunch of triangles and put it aside. Upon closer inspection I realized all the subtle detail folded throughout with the colors and shapes, and I promptly fell in love. Well done.

But does the story stand up to the art of the cover?

Well, yes, in fact it does.

The story follows Prenna, a girl from about 80 years in the future. She has traveled back in time with a group of about a thousand to the present day. In their futuristic time, the world was rattled by plague and Prenna’s people sought the past as a refuge. But when you play with time, things may not all be as they seem.

Despite the big premise of this book, it really revolves around Prenna and her love interest Ethan. In fact, the majority of the book focuses on them almost exclusively. It was an interesting break away from the traditional boy-meets-girl timeline because, at the start of the book, Prenna and Ethan are already really close, but the relationship turns romantic from there.

The love story of this book is sweet, yet evolves admittedly simply. Prenna and Ethan’s connection develops much earlier than I expected without a lot of frills and drama. They just fall for each other. In the midst of other novels with such grand love stories, I could appreciate a little teen romance that didn’t involve so many up-and-down emotions as it developed. That is not to say that in any way, shape or form the relationship doesn’t have its complications. Oh, boy, does it, but you’ll have to read the book to discover more about that. It wouldn’t be fun if we spoiled everything, after all.

The plot seemed almost secondary to the love story in a lot of ways but, of course, there was a big “saving the world” story that went along with the romance. It was fun, but nothing too deep or heavy. I found myself questioning a few of the moments in this book, but it didn’t feel unexpected given that the story deals with time travel. Overall, Brashares does a great job weaving everything together.

This is a book I would say you should add to your list. Whether or not you’re a fan of young adult fiction, the story and characters Brashares creates will definitely sweep you away for an afternoon, and then into the night as well because you won’t be able to put it down.

Have you read The Here and Now yet? What was your take on the novel?