The search for the Clairvoyant is put on the back burner. The team has a much bigger issue to deal with when the entire S.H.I.E.L.D. organization is threatened, in “Turn, Turn, Turn.” 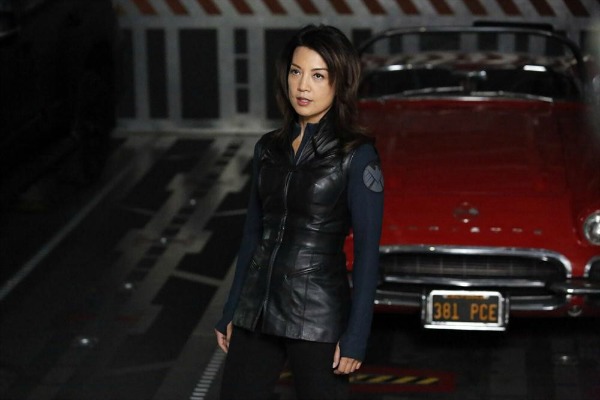 Backstabbing was the name of the game in this episode of Agents of S.H.I.E.L.D. I think it’s entirely possible that this show may have broken some kind of record with the amount of agents who were flipped or appeared to be flipped by the time the final credits rolled.

First there was May and her entire shocking story. As I said in my review of the last episode, I had a feeling that she had a good reason for calling that secure line and reporting on Coulson, but I never dreamed how far up and sideways her actions went. They went all the way up to Fury, and they went as far sideways as her being the one behind assembling Coulson’s entire team. Not only that, but it turned out the team had been put together for a very specific purpose: Either make sure that Coulson could be fixed after his ordeal, or put him down if that wasn’t possible. I absolutely believed her when she said she did it all to protect Coulson, but I didn’t blame him at all for still keeping her at arm’s length. That’s a massive lie and I think it will take him some time to forgive her for that.

Then there was the almost entire destruction of S.H.I.E.L.D. at the hands of Hydra. Like the team, I had no trouble believing that Agent Hand was the Hydra double agent that she seemed to be. But when she turned out to be trustworthy, I do admit that I immediately started looking around for other likely candidates. It was when Garrett started protesting so loudly against Hand that I knew something was fishy. All along, I’ve been suspicious of pretty much everyone in the search for the Clairvoyant so I can’t say that I was completely shocked.

No, the shock that nearly sent me reeling at the end of the episode was of course when Ward seemed to turn on S.H.I.E.L.D. and join the ranks of Garrett and Hydra. I never, ever would have seen that coming and there’s a part of me that still can’t believe it. I can’t help but to think that he’s on some deeper mission and being directed by someone we don’t know about yet. Or maybe he’s under some kind of mind control. Perhaps I’m being naive, but I just can’t imagine that the man who basically poured his heart out to Skye when he thought he was going to die is the same guy who would turn his back on S.H.I.E.L.D. So I am very curious to see how this plays out in the next episode.

“She’s a sleeper. I mean the other kind of sleeper.”

Garrett and Coulson arguing over whether it was a head or a limb that you cut off to make two more appear.

Trip giving Simmons his knife and pointing out if she used it against him, he’d know he couldn’t trust her. Good point.

“You’re right, the drive is safer in your hands. You haven’t taught me to hold up under torture yet.”
“We’ll get to that. It’s fun.”

Hand’s little test to determine if Simmons and Trip were on Hydra’s side.

The kiss. Yes! Loved that Skye claimed it was just because Ward might die.

“You should really look up the word ‘boring’ in the dictionary.”

“Phil, this is me being honest.”
“No John, this is you being a psychopath.”

Simmons running in to hug Fitz.

Coulson pulling Ward away to tell him that his mentor was Hydra. Loved how that was done only with music and no dialogue.

Literally screaming “No!” at my TV when Ward shot everyone on the plane and then nodded, (nodded!), at Garrett.

What did you think of this episode of Agents of S.H.I.E.L.D.? Do you think Ward really is working for Hydra?