Oscar Pistorius sobbed on the witness stand as he gave his play-by-play of the events leading up to the shooting death of model Reeva Steenkamp. 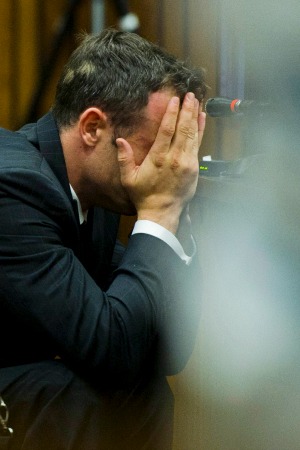 There is no disputing the fact that Oscar Pistorius shot and killed his girlfriend Reeva Steenkamp, but the Olympic athlete insists it was an accident — and today in court he described the fatal series of events in detail.

Often sobbing and becoming nearly hysterical, Pistorius began his testimony by explaining he was on edge that night because his security alarm wasn’t working, and he had the windows open while his air conditioner was on the fritz. In addition to the guns he kept in his bedroom, he placed a cricket bat against the bedroom door because he thought the lock was flimsy.

“It was at this point that I heard a window open in the bathroom, it sounded like the window sliding open. I could hear it hit the frame as though it had hit a point where it couldn’t slide any more. That’s the moment when everything changed,” he told the court in Pretoria. “The first thing that ran through my mind was that I needed to arm myself and protect Reeva and I. I needed to get my gun.”

The Blade Runner explained that as he made his way to the bathroom, feeling even more vulnerable without his prosthetic legs, he thought Steenkamp was still in bed.

“As I entered where the passage is to the bathroom I was overcome with fear and start screaming for the burglars to get out of my house. I shouted for Reeva to get on the floor. I slowly made my way down the passage, constantly aware that these people could come at me at any time. I didn’t have my legs on. Just before I got to the wall of where the tiles start in the bathroom I stopped shouting as I was worried the person would know exactly where I was and I could get shot. I heard a toilet door slam, what could only have been the toilet door. I couldn’t see inside, but it confirmed for me there was a person or people inside.

“I wasn’t sure if someone was going to come out of the toilet and attack me or come up the ladder and point a firearm in the house and start shooting, so I stayed where I was. I heard a noise from the side of the toilet that I perceived to be somebody coming out of the toilet. Before I knew it, I had fired four shots at the door. My ears were ringing, I couldn’t hear anything. I kept on shouting for Reeva to phone the police.

“As I peered in [to the bathroom] I could see that the window was open. I was with my back against the wall with my hand against the wall for balance slowly scuffling along the left-hand wall. I wasn’t sure if the intruders were in the toilet or on a ladder that they would have used to gain access or if they were round the corner at that point. I still had my firearm in front of me.

“I retreated back to the point where I got to the corner of the bed and I put my hand out on the bed and I tried to lift myself up whilst talking to Reeva. Nobody responded to me.

“I think it was at that point, my lady, that it first dawned upon me that it could be Reeva that was in the bathroom. I jumped out the other side of the bed and I ran my hand around the curtain to see that she wasn’t hiding behind the curtain.”

He said he reached for a cricket bat to bash through the toilet door.

“Whilst I leant in over the partition to get in, I saw the key. So I took it and I unlocked the door and flung the door open and I sat over Reeva and I cried. I don’t know how long I was there for. She wasn’t breathing.”

Steenkamp’s mother sat stone-faced through much of the testimony, but sank her head into her hands when Pistorius described the shooting.